There Is Still No War on Cops

Left and right are both politicizing recent killings of police officers to advance their pre-existing agendas. 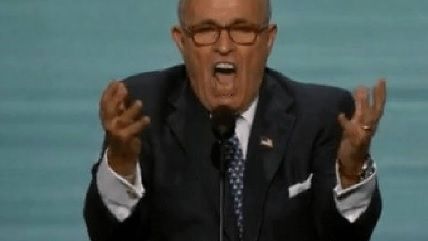 The "war on cops" meme has been deployed over the years because it works so effectively to shut down discussions about police reform. That means even in the wake of prominent killings of police officers, people who insist they support cops will turn to politicizing such killings in order to stymie broader conversations about reform.

Yesterday at the Republican National Convention was a great example of that. Rudy Giuliani insisted cops had a "target on their backs." Milwaukee Sheriff David Clarke, another RNC speaker, said there was a "war" in this country in which Black Lives Matter was the enemy.

Yet even with the deadly attacks in Baton Rouge and Dallas, police line of duty deaths (and fatal shootings) are both on pace to be similar to numbers in recent years. That's not to be dismissive of this month's tragedy, but to be dismissive of the awful politicization of these tragedies (first by a left obsessed with gun control, now by opponents of police reform). There have been 31 fatal police shootings this year, on pace for 58*, according to data from the National Law Enforcement Officers' Memorial Fund. While there were 39 fatal shootings of police officers last year and 47 in 2014, the year police reform became a mainstream issue, the war on cops rhetoric predates the current uptick. This year's numbers are lower than 2011, when 68 law enforcement officers were shot and killed, 2010 with 59, and 2007, when 67 were killed. Killings of police officers have been going down for decades, despite an increase in the U.S. population and in the employment rolls of law enforcement.

The upper line is for line of duty deaths, the number often used by opponents of police reform to overstate the danger police officers face. (There were in 2014 more fatal injuries in the leisure industry than in policing, according to data from the Bureau of Labor Statistics). The oft-repeated but inaccurate claim that a police officer is killed every 58 hours. A police officer dies while on duty about every 58 hours, but that includes accidents and other non-homicide deaths. The number of police line-of-duty deaths is on pace to be 121, the lowest number since 1959, when 115 police officers died in the line of duty.

One of the largest increases in fatal police shootings came in 1969, which saw a 35 percent increase in fatal police shootings. 1968 saw the most far reaching gun control legislation enacted in decades. Killings of police officers really took off in the 1970s, hitting a peak of 145 fatal shootings in 1975. Fatal shootings hit south of 100 in 1981 and has not gone above 100 since then, despite a proliferation of laws police are ordered to enforce on behalf of an increasingly fearful population increasingly amenable to the nanny state. The drop has also happened in spite of an increase in the U.S. population.

Republicans' cheap politicization of the attacks on police in Dallas and Baton Rouge was particularly tragic because it did not even attempt to offer solutions to lower the dangers faced by cops, it was just used to rile up an already friendly crowd, instead of, say, pointing out how the pressure for evermore laws by the left contributes to the conditions in which police violence thrives, an idea that comports with many of the things Republicans claim they believe in. For that matter, many of the proposals offered by Black Live Matter are rooted, whether activists acknowledge it or not, in ideas of limited, restrained government. Why would Republicans try to reach out to new voters by offering much-needed solutions to a problem Democrats have successfully exploited but failed utterly to provide solutions of their own for, when they could throw out bromides to ensure their base stays on their side instead? Especially when you can do it on the top of dead bodies.