Authoritarian Responses to Attacks Guarantee More Trouble in the Future

Officials are willing to tighten the screws on the society around them and risk increasing opportunities for confrontations between people and the state. 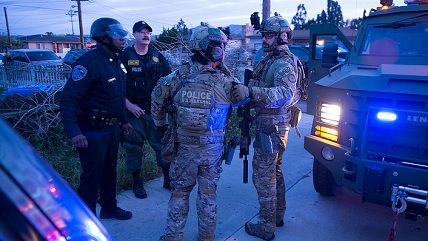 "Let me be as blunt and as direct as I can be," Newt Gingrich told Fox News' Sean Hannity in the immediate aftermath of the terrorist attack in Nice, France. "Western civilization is in a war. We should frankly test every person here who is of Muslim background and if they believe in sharia, they should be deported. Sharia is incompatible with Western civilization."

"Of Muslim background" would seem to include American citizens, raising the ante on the holes the offensive and authoritarian proposal blows in the Constitution (with special attention to the First and Fifth Amendments, for starters). And if Newt is willing to go after American citizens after the attacks in Orlando and Nice, what sort of inquisition does he want to impose on African-Americans and civil libertarians after the murder of police officers in Dallas and Baton Rouge?

But when it comes to jackbooted responses to the crises of the moment, Newt is in good—well, plentiful—company. He and his chums are willing not only to tighten the screws on the society around them, but to risk increasing opportunities for confrontations between people and the state.

A year and a half before Mohamed Lahouaiej Bouhlel drove a truck into a Bastille Day celebration in Nice, but after the bloody assault on the staff of Charlie Hebdo in Paris, George Washington University law professor Jonathan Turley warned, "The greatest threat to liberty in France has come not from the terrorists who committed such horrific acts this past week but from the French themselves, who have been leading the Western world in a crackdown on free speech."

Months later, France's President François Hollande declared a state of emergency that curtailed many civil liberties. "The measures give a number of exceptional powers to the authorities, including the right to set curfews, limit the movement of people and forbid mass gatherings, establish secure zones where people can be monitored and close public spaces such as theatres, bars, museums and other meeting places," France24 summarized. "The state of emergency also gives more powers to the security services and police, such as the right to conduct house searches at any time without judicial oversight, enforce house arrest and confiscate certain classes of weapons, even if people hold them legally."

American officials have likewise eagerly favored violating civil liberties as a means of soothing public fears. Restrictions on self-defense rights have been popular with American politicians—including bans on so-called "assault weapons" which are distinguished primarily by their military appearance.

"Reinstate the assault weapons ban," President Obama demanded after the Orlando nightclub shooting by Omar Mateen. "Make it harder for terrorists to use these weapons to kill us."

The more-safety-through-tighter-legal-restrictions narrative was complicated by the use of a truck in Nice to slaughter 84 people, not to mention the black market procurement of military weapons by earlier terrorists. Are we really supposed to ban delivery vehicles? Or pass new laws to make criminal acts extra-criminal?

After the Orlando nightclub shooting, in a move seconded by Obama, Sen. Dianne Feinstein (D-Cal.) introduced a bill that would have banned gun purchases by any of the people mysteriously placed on various already troubling terrorism watch lists. These lists that have included "members of Congress, nuns, war heroes and other 'suspicious characters,'" Caroline Fredrickson, director of the ACLU Washington Legislative Office remarked in 2008, when the lists hit one million names.

Getting off those lists is a lot harder than the whims and paperwork errors that often get people listed on them, raising huge due process concerns.

"We generally don't take away rights based on suspicion," UCLA law professor Eugene Volokh noted with regard to depriving people of liberty based on their inclusion on the lists. "The government has to have some proof. If all the government can say is we suspect you of supporting terrorism, that's not enough."

Proof of a threat is also in short supply in the cases of Americans recently arrested for voicing harsh opinions of police—or sympathy for Micah Johnson, the man who murdered five police officers in Dallas.

"I know this is a new issue, but I want these people charged with crimes," Detroit police Chief James Craig said after four men were arrested for posting anti-cop messages on Facebook—one called Johnson a "hero."

People were also arrested in Connecticut, Illinois, Louisiana, New Jersey for vitriolic anti-police language, little of it seeming to rise to the relatively high bar for threats set by the U.S. Supreme Court in last year's Elonis v. United States decision. They may ultimately win their cases in court—but they've still been arrested and dragged through the system not for acts, but for speech.

"We are sending a letter to Gov. Kasich requesting assistance from him. He could very easily do some kind of executive order or something — I don't care if it's constitutional or not at this point," said Loomis.

Credit is due Loomis for putting forward a pure form of the contempt for liberty and due process that prevails among public officials. Almost universally, officials both elected and appointed have responded to the terrorist attacks and civil strife with moves to expand police power, punish controversial opinions, and push aside protections for individual rights.

Inevitably, these attacks on liberty increase opportunities for unpleasant encounters between government officials and the public at large.

"French law enforcement officials have conducted more than 3,200 raids and placed between 350 and 400 people under house arrest, following unprecedented attacks in Paris and the Paris suburb of St. Denis on November 13, which killed 130 people and injured hundreds," reported Human Rights Watch in February of this year. "However, the counterterrorism unit of the Paris prosecutor's office has opened only five terrorism-related investigations."

"[T]hese measures are aimed at a specific movement and at very observant Muslims. That can give rise to a feeling of injustice and of defiance towards public authorities," the French human rights ombudsman admitted to the organization.

In other words, France's efforts against Islamist terrorism risk alienating and radicalizing the larger Muslim community.

Likewise, the arrests of Americans voicing strong opinions about police occur in an environment in which law enforcement and many Americans—especially African Americans—are already at odds. Micah Johnson killed police officers during a protest against shootings by police of black men in Louisiana and Minnesota. The Baton Rouge killings occurred in a city still tense over one of those incidents.

Notably, just a week ago Baton Rouge cops were called out for their aggressive tactics against protesters. They chased people from private property, engaged in seemingly random arrests, and threatened journalists at the scene.

Gingrich, Feinstein, Loomis, Obama, and their counterparts overseas apparently think that none of this is enough. They say we need more restrictive laws, new classes of criminals, and expanded state powers—all of which, inevitably, will breed more confrontations, anger, protest, and violence.

And you can already guess what their responses will be.