Cato Unbound forum pits a 'culture of freedom' vs. strategic marketing; I argue for the libertarian Big Tent 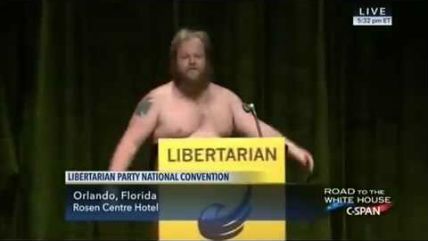 In June, I attended the Free State Project's weird and wonderful Porcfest for the first (though definitely not last) time. The past four days, I put in my seventh or so appearance at the Skousen family's one-of-a-kind Freedom Fest event in Las Vegas. Squinted at from a certain angle, the conferences have almost nothing in common culturally—one's a bunch of old-skewing people on the Strip who venerate Dinesh D'Souza and listen to Jeffrey Tucker sing showtunes, the other's a bunch of wild-eyed hippie idealists in the woods doing drugs and carrying guns. Yet both are distinctly libertarian gatherings, featuring some overlapping interests (Blockchains!) and a least some of the same attendees (including Jeffrey Tucker). And at both events, casual conversations very quickly turned into referenda on James Weeks.

You may remember James Weeks—portly ginger fella letting it mostly hang out on the right, during an absolutely crucial and dramatic moment at the Libertarian Party's National Convention in Orlando seven weeks ago. Weeks had been planning to run as the party's national chair, but used his nominating-speech time-allotment—which came as the party was agonizingly counting up the tense and hotly contested second ballot for unloved-by-Libertarians vice-presidential nominee William Weld—to A) announce his withdrawal, and B) take a buddy's dare to conduct a striptease while the C-SPAN cameras rolled.

there were widespread [boos] and general disapproval of Mr. [Weeks'] exuberance. Rather than enjoying a respite from the grey blandness of the convention, people were muttering that the world would think that Libertarians were fools. Well, if we care about such [trivialities], then we are indeed fools.

For me, I was far more ashamed of those who turned their heads in disgust than by anything Mr. Weeks did.

Yet the lines of reaction are not always predictable. Radical Caucus stalwart Caryn Ann Harlos (no stranger herself to odd-for-boring-politics costumes) declared herself no fan of the dance. Late-breaking LP fundraiser Matt Kibbe, long of GOP politics, basically shrugged it off; while others who've been writing checks to the party for decades pronounced themselves mortified. It's a fascinating if ultimately small-beer conundrum, one that touches on all sorts of questions about tolerance, messaging, and what happens when a marginalized political bloc starts stepping out into the sunlight.

Cato Unbound, which exists for these types of debates, is holding one now on precisely this topic. Gary Chartier, the anarchistic professor of law and business ethics, gets the ball rolling with a full-throated celebration of valuing "not just political freedom but also social, cultural, and psychic freedom." Daniel Bier, an editor at the Foundation for Economic Education, counters, pretty sensibly, that

And I, as the house squish and Marc Allan Feldman fan, argue that any Big Tent worth its salt should also exhibit a certain amount of tolerance for the Normals. Excerpt:

I was disappointed that James Weeks got suspended from the LP. The action carried not a small whiff of insecurity that all the party's measurable momentum is fragile and susceptible to sudden reversal. I have witnessed over the years other moments of we-blew-it despair, from the controversies over Ron Paul's old newsletters, to his son's failure to launch in the 2016 campaign, to Gary Johnson's awkward performance on CNN ("I fear we shall not have our moment," a prominent Libertarian supporter texted me after the town hall. "The road has just become longer"). And as Darryl Perry demonstrates, the temptation toward apocalyptic doom is not limited to the "adults."

Libertarians should have more confidence in the long-term prospects for their ideas, and resist the temptation to see any particular moment or political campaign as some kind of make-or-break hinge point. The ideas will survive man-boobs—in fact, some of the best ideas will be hatched precisely from the freakiest quarters.

But the tolerance works both ways. Having "telegenic" libertarians present themselves professionally in national political discussions is a good thing, not something to dismiss or resent. Any culture of freedom and tolerance that doesn't also include freedom and tolerance for the squares and the squishes is failing to live up to its promise.

The good news is that both libertarianism and the LP have roughly arrived at places where that kind of two-way tolerance is the rule, not the exception.