A comedy classic remade, and a Woody Allen showcase for Kristen Stewart at her best. 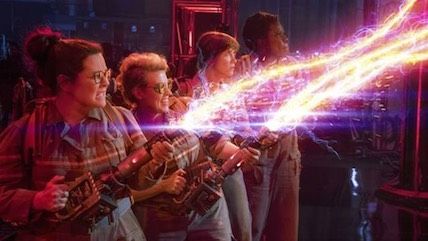 Q: How much does this new Ghostbusters suck?

A: It doesn't, actually. Have you seen it?

Q: But why did the new Ghostbusters all have to be women? Is this some kind of feminist lecture? Why not have the old Ghostbusters come in and pass the torch to a new crew of women and men?

A: That's a good question, partly. Passing the torch would have been a smooth way of establishing continuity with the two earlier Ghostbusters films, maybe less jarring than simply presenting us with a whole new group. But this isn't a sequel; it's a remake. And the all-women thing—well, why not? It turns out not to be an issue at all. The new ghost-busting crew—McKinnon, Kristen Wiig, Melissa McCarthy, and Leslie Jones replacing the 1984 team of Bill Murray, Dan Aykroyd, Harold Ramis, and Ernie Hudson—aren't quirk-for-quirk copies of the previous gang; they're engaging in their own way. It's not really one of those women-can-do-this-stuff-too deals.

Q: But who needs a remake of a movie that was already perfect?

A: Who needed John Carpenter's remake of The Thing from Another World? This new Ghostbusters might not be necessary, but it's better than not bad.

The story has been effectively tweaked. It's still set in New York, but now we have Wiig's Erin Gilbert, a Columbia University physics professor, worried she'll be denied tenure after the embarrassing reappearance of a book on the paranormal that she wrote years earlier with her estranged friend Abby Yates (McCarthy). It's Abby who has re-launched the book online; she's still in the paranormal-phenomena business, and Erin finds her in a cluttered lab working on a "reverse tractor beam" with her partner, the leeringly androgynous weapons inventor Jillian Holtzmann (McKinnon). Soon these three are beset by red-eyed demons spewing gouts of good old green goo (right into our faces—this is a 3D movie with likably cornball instincts). Erin joins the team, and they set up shop as Ghostbusters.

A: Before long, they round out the lineup with an MTA employee named Patty Tolan (Jones), who has encountered a menacing apparition down in the subway where she works. Next they hire an office receptionist named Kevin (Hemsworth), a ridiculously hunky Australian whose brain seems to be wired into another dimension. (Fielding a call for demon assistance, he reports that "There's a goat on the loose"). After that, we get callbacks to the original movie: proton packs and a Ghostbusters hearse with an "ECTO-1" license plate, plus cameos by Murray, Aykroyd and Hudson. (The late Harold Ramis is represented by a memorial bust in a school hallway.) And of course we get lots more demons—most memorably, a towering creature that rises up onstage during a heavy metal concert (it fits right into the show).

Q: So you're saying this is a pretty great movie. Is Sony paying you for this review?

A:  No. And, alas, no. The picture has problems. It helps that McCarthy has been directed to dial down her loudmouth-fat-lady inclinations (she's appealingly restrained here), but Wiig is puzzlingly under-used—she spends a lot of her screen time gazing longingly at the ultra-buff Hemsworth. (A satirical thing, I know, but still a waste of Wiig.) There's already been grumbling about Jones playing a retrofitted black stereotype; and the villain of the piece—a bitter janitor named Rowan (Neil Casey), mumbler of things like "Create the Vortex" and "Open the barrier"—is too mild-mannered to be a convincing demon master.

But I'd see this movie again just for Kate McKinnon's unhinged grin and her ga-ga delivery. (She fully inhabits a character who might have been dropped on her head at an early age, and the queef joke she gets off in one scene is pretty avant-garde for a PG-13 film.) Let me risk a cliché and say that this actually is a breakthrough performance.

Woody Allen's new movie is set largely in Los Angeles in the late 1930s, and it looks as if it were shot in a perpetual twilit golden hour. It's Allen's first collaboration with the great cinematographer Vittorio Storaro (Last Tango in Paris, Apocalypse Now), and the production furnishings—the silks and linens, the richly paneled rooms and parchment lampshades—have a sweet, gentle glow. Even in the director's 81st year, the picture suggests a new creative direction in which he might move.

The story is simple, but it has the tug of enduring heartbreak, thanks mainly to the movie's stars, Jesse Eisenberg and Kristen Stewart. Eisenberg is Bobby, a Jewish kid from New York who comes to L.A. to seek employment with his Uncle Phil (Steve Carell), a movie-biz titan who heads a top talent agency. Phil hires Bobby as a lowly gofer, and soon he becomes involved with Phil's assistant, Vonnie (Stewart). Vonnie tells the love-struck Bobby she already has a boyfriend, and this turns out to be the long-married Phil, who keeps promising Vonnie that he'll leave his wife in order to marry her. That never seems to happen, though, and Vonnie, who truly loves Phil, has grown tired of waiting. Soon she realizes that she truly loves Bobby, too. Complications naturally ensue.

Eisenberg is playing what would usually be the movie's Woody Allen surrogate, but now without the nasal whine and the nebbishy mannerisms. He gives a strong performance as a young man on the rise, a guy who can have anything he wants except the one thing he wants most of all. But Stewart is the conflicted heart of the film, creating a character out of haunted gazes and gestures and finely judged line readings. It's an eloquent portrayal of a woman who's trapped in a romantic stalemate, and can't find her way out of it.

The supporting cast is more than solid. Blake Lively is beautiful and poignant as a smiling-through-the-tears woman Bobby meets back in New York. And Corey Stoll injects a rowdy energy into the story as Bobby's older brother Ben, a mobster who settles his personnel problems by burying them in wet cement at outer-borough construction sites.

The movie has most of the traditional Allen signifiers: the vintage music (mostly Rodgers and Hart), the fond period referents (passing Hollywood mentions of Barbara Stanwyck, Joel McCrea, "Mr. Goldwyn"). But in striking addition, there's also a sense of hope against mortal odds. Allen's gloomy jabs at death and human futility are less pronounced. Here we have Bobby's other brother, the straight-arrow Leonard (Stephen Kunken), arguing the existential necessity of being kind and helping other people. There's even talk of a redemptive afterlife. The movie ends, movingly, on a note of yearning regret. But maybe it's not the end of the world.