Is the T in Donald Trump's New Campaign Logo Schlonging the P in Pence?

The GOP candidate's new graphic looks an awful lot like a penis. 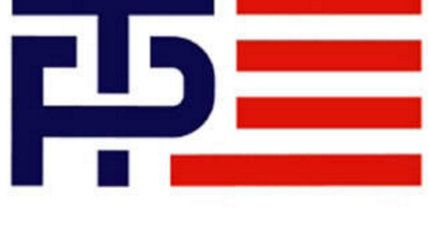 More than a few people have already noticed that Donald Trump's new campaign logo, the first to reflect his choice of Mike Pence as his vice presidential running mate, looks more than a little bit sexually suggestive:

Specifically, the charge is that the T looks kind of like a penis—and that it appears, as Trump might say, to be shlonging the P in Pence, at least symbolically.

At Slate J. Bryan Lowder offers one possible interpretation, writing that the logo "very accurately conveys the attributes Trump wants associated with his political and personal brand—namely, that he has a penis and he uses it to screw people." I'm no graphic art critic, but the logo does seem to suggest that Trump is dominating Pence, a vice presidential pick that Trump was reportedly scrambling to reconsider as late as midnight last night.

Is that symbolism intentional or inadvertent? There's no way to say, and the cheap, amateurish quality of the design suggests that it may just have been drawn up quickly, with little thought as to the implications. But it certainly wouldn't be the first time that Trump has alluded to his manhood while on the campaign trail: In a Republican primary debate earlier this year, Trump responded to those who have described his (small) hands as small by saying "He referred to my hands, if they're small, something else must be small. I guarantee you there's no problem. I guarantee it."

I'm not sure there's too much in the way of penetrating insights to be gleaned from Trump's choice of logo. But it does strike me that the incident is typical of Trump's campaign so far. At worst it can be viewed bizarre, vulgar, and wildly inappropriate coming from a presidential candidate. At best it shows the candidate and the campaign to be inept and dysfunctional, reliant on shoddy workmanship, unable to exercise basic political judgment, and generally unable to competently execute the most basic elements of a modern political campaign. The logo is further proof, not that we needed any, that when it comes to running for president, neither Trump nor anyone he works with knows dick about dick.