Also, the case for school choice. 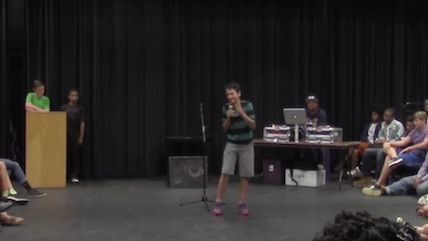 When you listen to 14-year-old Royce Mann rap about his "white boy privilege," do you applaud the young artist for his progressive vision, or do you roll your eyes at such obvious proof of leftist indoctrination in the classroom?

For most people, your answer probably aligns with whether you are horrified by Donald Trump or eager to see him make America great again.

The Georgia eighth grader's beat poetry performance begins like this:

The rest is more of the same. Mann's language is occasionally colorful—he says "bullshit," and "fuck."

A video of the performance—which won first place at a competition—went viral earlier this week, earning praise from left-of-center news outlets.

"Privilege," wrote The Huffington Post's Cavan Sieczkowski. "Some don't get what it means, but 14-year-old Royce Mann sure does."

"Royce Mann eloquently addressed the racial, gender and socioeconomic disparities that exist between white boys like him and those in marginalized communities," wrote Mic's Sarah Harvard.

"Left-wing media and social justice warriors are salivating over a white eighth grade boy who has taken first place in a "poetry slam" for his poem titled "White Boy Privilege," in which he apologizes for the "privilege" of white boys and men," wrote Breitbart's Susan Berry.

For folks on the right, the biggest problem with Mann's views isn't that he holds them—it's that he learned them in school.

To be clear, Mann attends an expensive private school, the Paideia School, in Atlanta. Administrators at Paideia have every right to make the curriculum explicitly social justice-focused—and if parents want to spend extra money sending their kids to such a school, that's okay.

Still, if you are worried that America is becoming too politically correct—and that left-wing indoctrination at colleges and universities is part of the problem—you probably won't be pleased to learn that Race, Class, and Gender is a required course for some eighth-graders. This is the kind of thing that drives certain people into the arms of Donald Trump.

Many people on the other side of the ideological aisle trip over themselves in their haste to congratulate someone for a display of purely symbolic social signaling. This signaling goes both ways: criticizing privilege is double-plus-good, and sharing viral news articles about criticizing privilege is also double-plus-good. Progressives can prove how woke they are without having to actually lift a finger to help anybody.

I'm not particularly bothered that Mann is learning about privilege—yes, privilege exists. I'm glad that he has the opportunity to attend the school that aligns with his family's values and interests. And I'm thrilled that he's taking his studies seriously and that his artistic talent has brought him some national attention.

In fact, I suspect that he's right: he is incredibly privileged. Not necessarily because he's white or because he's a man, but because he can afford to pay $22,000 per year to attend junior high.

Many of the under-privileged people he professes to care about aren't so lucky. They are forced to attend failing public schools. Test scores for students in the Atlanta Public School system were so bad that nearly 200 teachers at 40 different schools were caught routinely altering students' answers in order to improve their performances.

One of the best things society can do for the underprivileged is to approve school choice. These reforms let kids take back the money the government confiscates for their mandatory educations and instead spend those dollars at the schools that serve individual students the best. We already know it works.

Maybe Mann can work that into his next poem.

Updated at 2:50 p.m. on July 14, 2016: A neighbor of the Mann family writes via email that many students who attend Paideia receive financial aid, including Royce. She also relayed this statement from Royce's mother: "Folks are reasonably assuming that he's from a rich family, and he is, just not in terms of money! I think it's cool that he understands how he's privileged even in our comparably modest circumstances, privileged in so many ways due to the things he so eloquently expresses."