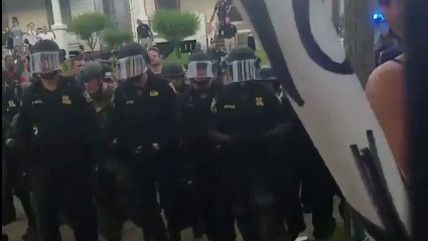 The Louisiana chapter of the American Civil Liberties Union (ACLU), in conjunction with a number of local organizations, have filed suit against the Baton Rouge (La.) Police Department over its response to protests against the police killing of Alton Sterling last week.

Over 200 people were arrested during various protests in Baton Rouge last weekend, including one protest where riot gear-clad officers advanced in formation on protesters who (with the permission of the homeowner) had congregated on the front lawn of a private residence.

According to NOLA.com, "protesters expressed disbelief that police would break up what had largely been a peaceful protest leading up to the arrests. Most of the protesters tried to obey police orders to stay out of the roadway, even backing off a grassy strip next to the road when police told them to move onto the sidewalk."

Watch a brief clip of that incident via NOLA.com below:

Baton Rouge PD Lt. Jonny Dunham later told CBS News that the protesters had already broken the law by attempting to march along the on-ramp to the Interstate. Dunham added, "They felt like they could jump in her yard and be safe, but once you've broken the law, there's no safe space." Police also claimed that large chunks of concrete had been hurled at them at a protest earlier in the day, but that no officers were injured.

"[The police response] made me afraid to protest. Seeing the way the police were manhandling folks caused me to hide, scream out of fear, and finally flee for my safety. I had to run. A peaceful demonstration should never be like that," expressed Crystal Williams, local resident and organizer with North Baton Rouge Matters, "I feel like speech is my most powerful tool to ensure my community and my family are safe. But now I feel totally silenced."

Louisiana Chapter of the National Lawyers Guild President and Catholic nun Alison Renee McCrary: "I witnessed firsthand as peaceful protestors [sic] were violently attacked and arrested, assault weapons pointed at them with fingers on the triggers, some dragged across the cement, their clothes ripped off of them. What I saw happening was an immediate threat to life. My and other demonstrators' speech was chilled because of this event."

Baton Rouge PD spokesman Maj. Doug Cain was quoted by NOLA.com as saying protesters "voicing their First Amendment rights is protected by us" and that short of direct calls for violence, "they are free to express whatever feelings they convey."