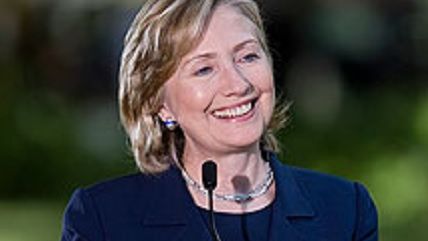 Hillary Clinton went on anti-Trump Twitterstorm today. Actually likely one of her unpaid interns or well-paid consultants—tweets from Clinton's account are rarely signed "-H" and there was a case made the Barack Obama Twitter account, run under the same principle, ought to be treated as a parody account. As Mark Hammer noted on Twitter last month, "the genius of the Trump Clinton Twitter war of 2016 is that it consumes Trump's every waking minute and Clinton doesn't know it's happening."

One tweet in particular exemplifies why it doesn't suffice to keep candidates like Donald Trump (or Clinton) out of office—reforms that limit the power of government officials are necessary to prevent abuses of power.

Imagine if Trump had not just Twitter to go after critics and opponents, but also the IRS—or our military. Do you think he'd be restrained?

As plenty of twitter users noted to Clinton, it's not hard to imagine given President Obama's record of using the Internal Revenue Service (IRS) to target conservative groups. Similarly, President Obama has continued the tradition of concentrating the decision to use military force in the hands of the executive branch despite the Constitutional role prescribed for Congress in war-making. The Congress has not taken any legally effective vote in favor of any of the campaigns Obama has engaged the military in, from West Africa to the Middle East.

In the twilight of his second term, Obama has also doubled down on the notion that unilateral executive action is necessary merely because the legislative, a co-equal branch of federal government, doesn't wish to act. "I've got a pen and a phone," President Obama said at the beginning of 2014.

While Trump may appear the most openly eager and willing potential successor to use those same powers, Hillary Clinton, with her history in government, is just as, if not more, willing to use unilateral executive action. She said she'd do so in the face of a Republican Congress that dared to act like a co-equal branch of government, and promised to do so specifically in curbing Americans' Second Amendment rights.

Clinton ought to examine her own role in enabling the executive branch power she now claims is a reason to vote for her instead of Donald Trump. Of course if voters really fear unlimited executive branch, the Libertarian party, long-time skeptics of government power, have a presidential candidate of their own, Gary Johnson, who's likely to appear on all 50 state ballots in November.