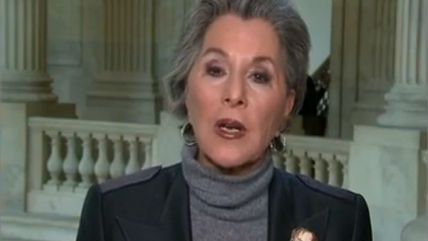 Yesterday, as normal Americans were wrapping up their work day, gearing up for baseball's home-run derby, or playing cell-phone video games in the park, 19 senators from the Democratic Party began taking to the floor of the World's Greatest Deliberative Body to express their collective "disapproval" of the way 33 organizations speak about climate change, and to urge these allegedly "interconnected" groups to cooperate maximally with various ongoing government investigations into their uncorrect opinions. The purpose of this two-day name-and-shame exercise, the senators bragged in a press release, is "to call out Koch brothers- and fossil fuel industry-funded groups that have fashioned a web of denial to block action on climate change."

Sen. Elizabeth Warren (D-Mass.), a co-sponsor of the concurrent resolution under discussion, embodied the spirit of the exercise yesterday by decrying oil companies' "huge secret contributions" to "fake-science think tanks," which are "so dangerous" because they enable politicians "to keep right on blocking meaningful action while the earth slowly chokes on its own filth":

The #WebOfDenial/#TimetoCallOut exercise, designed openly to criminalize one side of a public policy debate by using such grossly inappropriate statutes as the Racketeer Influenced and Corrupt Organizations Act (RICO), continues into its second day with an attack that adds illiteracy to intimidation: Sen. Barbara Boxer (D-Calif.) this afternoon is scheduled to decry those scurvy climate denialists at…um, the Reason Foundation?

Even Jane Mayer's 2010 New Yorker hit piece on the Koch Brothers, the ur-text of modern Kochspiracy-mongering, knew well enough to keep Reason—on whose Board of Trustees David Koch sits—out of the whole, they're-just-into-libertarianism-in-order-to-pollute narrative. For the easily discoverable reason that calling Reason a climate-change denialist is like calling Barbara Boxer a Republican. Since the targets of this shaming exercise are not being afforded the courtesy to rebut the charges in the forum at which they are being smeared, consider this a prebuttal: Sen. Boxer, if you present the Reason Foundation as a climate denier on the Senate floor, you will be lying. About one of your constituents.

But make no mistake: This coordinated campaign would be an assault on free speech even if it were not drenched in conspiratorial inaccuracy. Democratic lawmakers, attorneys general, and activists are systematically singling out free-market think tanks for potential criminal prosecution and one-sided disclosure requirements based on the content of the think tanks' research and commentary. They are literally trying to criminalize dissent. If successful, they will establish as "fraud" or "racketeering" any future think-tank work that runs afoul of political orthodoxy. President Trump will have a helpful precedent to sic his Justice Department on groups that advocate for free trade and open immigration. George Soros will no longer get away with his current levels of foundation transparency.

Sadly, this heavy-handed act of government intimidation will likely go as unnoticed as Hillary Clinton's long track record against free speech. Why? Because generally speaking both the mainstream press and the organized left reserve their First Amendment outrage for politicians they disagree with. Their silence is shameful, and deafening.

The senators' action this week is no hyperbolic one-off: Prosecuting ungood climatology is baked right into the Democratic Party Platform. The two major Democratic nominees for president agree. There was a time when lefties at least pretended to be the political bloc that most favored free speech. The best you can say about this latest episode is that they've finally dropped the pretense.