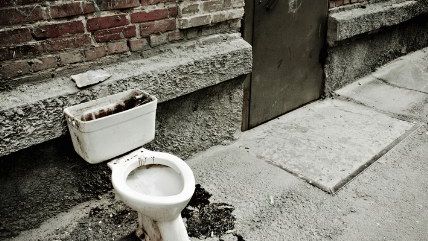 Delegates to the Republican National Convention will be spending the week hammering out the wording for the party's official platform. And the debate has gone into the toilet, purposefully.

At hand among delegates in a platform subcommittee is whether the national party should oppose the current administration's efforts to mandate public schools accommodate transgender students in the bathroom and other gender-specific facilities. While there appears to be a push by some Republicans to get the party to ease off on LGBT social issues, they were unsuccessful in their effort to try to get them to stay out of this fight. Via Yahoo News:

Annie Dickerson, a delegate from New York and an adviser to GOP billionaire donor Paul Singer, urged her colleagues to strike language that condemns the Obama administration for telling schools to allow students to use the bathrooms and locker rooms of their gender identity. (Singer has funded pro-gay marriage efforts around the country.) The RNC draft platform says the guidance is "illegal and dangerous" and "alien to America's history and traditions."

Dickerson urged her colleagues not to get distracted by the issue, which she said would alienate LGBT Republicans and pull the convention into a contentious issue.

"Bathrooms takes us down a rabbit hole," Dickerson said.

But down the rabbit hole they've gone, at least for now. Social conservatives convinced the delegates to keep this new position. One said it was a "safety issue." To be fair, the decisions by the Department of Justice and the Department of Education have turned public school transgender accommodation into a federal concern. It's perhaps not possible for the party to completely avoid the issue, because the next administration will be controlling the direction of the federal activity here.

Liz Goodwin also noted that attempts to strip the platform from defining marriage as between a man and a woman or from declaring that every child deserves a "married mom or dad" failed. The platform as it stands will call for a constitutional amendment to allow for states to decide whether to legally recognize same-sex marriage.

But then, it's not clear whether the Republican Party's formal position on anything actually matters when they're probably going to end up nominating the mercurial Donald Trump. On social issues, he has probably at one point or another held every single possible position on each subject of controversy. Trump has said that he will accept the party's platform and is keeping out of the debate. Whether anything on the platform actually influences Trump's positions in any way is a whole different question.

But even without Trump's participation, it looks like the party is keeping him in mind when drafting the platform. The Republican delegates have decided to strip out entirely all language either endorsing or opposing the Trans-Pacific Partnership (TPP) trade agreement. Instead, according to Politico, they'll have a broader statement in opposition to "massive trade deficits," which is putting a stamp of approval on economic ignorance in trade. Trade deficits are not the same as budget deficits. Having a trade deficit with another country means you buy more stuff than you sell. This is not inherently in any way, shape, or form a bad thing, because you end up with more stuff.

So anyway, that's where we stand right now. The Republican Party feels the need to weigh on which bathrooms teenagers should use in school, but not on whether an international trade agreement is a good thing.