Gary Johnson: I'll Cut Your Taxes and Save Social Security 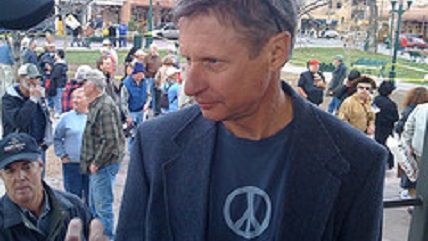 Gabby Morrongiello and Sean Higgins of the Washington Examiner have conducted a wide-ranging and interesting interview with Libertarian Party presidential nominee Gary Johnson. He promises to cut taxes and limit the size and scope of spending. He also shows incredible reality testing when it comes to politics.

Examiner: Can entitlements be reformed in any meaningful way? I mean is it politically feasible?

Johnson: I believe so, in my heart of hearts. Medicaid and Medicare both need to be devolved to the states. As governor of New Mexico, if the federal government would have given me a fixed amount of money, say based on the prior year and that I needed to draw new lines of eligibility to make that money work.

In my heart of hearts, those that do need a safety net would have received it, and we'd have done it for a lot less money. I say 50 laboratories of innovation and best practice, the states, there will be some fabulous success if we'll do that, there will also be horrible failure, but we'll all emulate the success.

And Social Security, I mean raising the retirement age for starters. Look, it's insolvent in the future. It's going to be insolvent. It has to be addressed.

And if we're going to put our heads in the sand, electing a president that's not going to acknowledge that and take part in the debate and the discussion over how do we reform Social Security so it is viable in the future … Look, I think we all understand that. But Trump and Clinton don't, or this is somehow the ticket to getting elected and then re-elected.