Did the Libertarian Radicals Lose Their Inter-Party Fight? Not So Fast, Says One

Caryn Ann Harlos points out that the L.P.'s Radical Caucus won a bunch of important platform fights, and has plenty of momentum 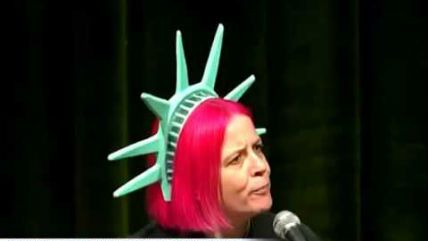 This morning we posted my column about the Libertarian Party convention from the August/September issue of the print magazine, cheekily titled "The Libertarian Party Moment: Taking the naked leap from the margins to the mainstream." In it, I make the claim that, striptease performances notwithstanding, "The radicals and free spirits lost. Ten minutes after James Weeks II's man boobs and freedom jockstrap beamed into America's living rooms, the delegates nominated [William] Weld" for vice president, despite very deep misgivings about his Libertarian bonafides.

NOT SO FAST, shot back L.P. Radical Caucus member and beloved party activist Caryn Ann Harlos, via email. Speaking in her personal capacity, though certainly channeling some Rad-Caucus views, Harlos made some good points worth sharing here. An excerpt from our correspondence:

The radicals had a huge effect this convention, and while we did indeed "lose" (I am not sure that is the word I would use since this is a party effort, and the delegates chose and we are getting behind our candidates, one of our board members is a state coordinator for the GJ campaign) on the Presidential/Vice Presidential ticket, we gained in multiple critical areas that will have long term internal effects.  We defeated every single anti-radical bylaws and platform issue that came up, and others never got heard. We motivated floor work in a way not seen in long time, and our membership has grown more and more active.  Additionally, out and open radicals gained seats on the Libertarian National Committee.  This will last far beyond November. […]

[T]he growing influence of the radicals cannot be underestimated… we are on the ascendency at this point despite the more moderate ticket.

Harlos went on to inform me that stripper James Weeks resigned from the Radical Caucus, and that many of its board members were not happy with his performance. "Please do not paint his actions as those of the radicals or representing us," she said. "We had no advance knowledge he was going to do that."

Anecdotally, and also from my position of inexperience (it was my first Libertarian National Convention), my impression is that Harlos is right—the Rads have the juice, or at least a lot of the stuff. (One can argue that second-place presidential finisher Austin Petersen has also brought in an energetic element.)

Consider this data point: In 2012, Gary Johnson breezed to a first-ballot victory, grabbing 70 percent of the vote; and his preferred V.P. pick, Judge Jim Gray, sailed by with 60 percent. Yet this time around Johnson got a few votes less than the 50 percent threshold on the first ballot, and Weld came damn close to getting croaked on his second ballot, thanks in large part to effective and boisterous rallying from the activist base. This wasn't a 100% Radical Caucus story, but they were right there in the thick of it all. That's partly what made the convention, and its underlying tensions, so interesting to cover.