Get Ready for President Hillary on Tonight's Stossel!

Watch Fox Business Network at 9 p.m. for a repeat of an hour-length libertarian critique of the Democratic nominee, including Matt Welch talking about Clinton's terrible free speech record. 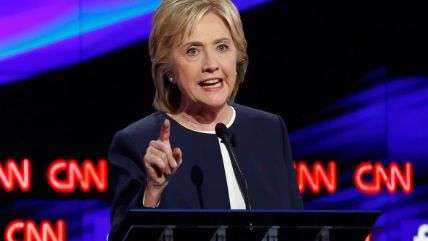 Tonight at 9 p.m. on Fox Business Network, television host and Reason.com columnist John Stossel is airing a repeat of his June 24 program exploring all things statist about presumptive Democratic Party presidential nominee Hillary Clinton. As I wrote in my original tease for the show, Stossel

was kind enough to ask me to come on for a segment and talk about the presumptive Democratic nominee's long and terrible record on all things free speech. The Stossel team unearthed some truly gruesome video clips to help make the point as well.

You can read about our putative Censor in Chief in my March cover story, and in a couple of follow-ups: "Tech/Gaming Journalist: 'I think' Hillary Clinton's 'war on video games' was 'well-intentioned,'" and "Why Are the Newspapers That Condemn Donald Trump's Free-Speech Rants Endorsing Hillary Clinton?"

And here's a lil' clip from my appearance: