Happy 4th: Here's Some Vintage Capitalism Propaganda for You 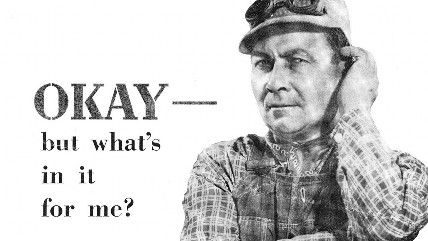 In 1949, some folks started to worry that maybe Americans didn't realize how good they had it. So the Ad Council—the fine people who later brought us slogans like "friends don't let friends drive drunk" and delivered Smokey Bear to our living rooms—decided to launch a massive campaign to sell American-style capitalism back to the Americans living under it. Members of the Ad Council (mostly retailers and other corporations at the time) sponsored a deluge of ads endorsing "the free enterprise system" and exhorting readers and listeners to learn about and defend "The Miracle of America."

One ad suggests you ask grandma how much the past sucked: "Today your purchase is sure to be delivered on time, but back in 1900, sometime it got there and sometimes it didn't," the ad declares, with whimsical doodles of dead horses to illustrate the point. "Today we have smooth easy ways to get you upstairs, but in 1900 you'd have been safer to walk."

Another ad reminds you that when your piano is out of tune, you don't chop it up and get a tin horn instead: "Our American way isn't perfect. We still have our ups and downs of prices and jobs. We'll have to change that. But even so, our system works a lot better than the second rate substitutes being peddled by some countries we could mention."

Several drop some stats about the falling prices of goods: "In 1914…Pappa had to work 15 hours for the price of his shoes. Today…because of higher wages…because of increased production under our free competitive system…Pappa can get a better pair of shoes from the wages of 5 hours work."

Utterly devoid of irony, the ads come across as boosterishly simplistic today. And many other ads in the series, which ran for more than a decade, endorse less freedom-friendly positions—such as massive increases in defense spending and protectionist policies—but the underlying point stands that markets make people's lives better, more pleasant, and more hopeful. So this weekend, as you traipse around in inexpensive sturdy shoes, eat cheap delicious hot dogs, and watch the fireworks on your enormous TV in air-conditioned comfort, why not take a minute to appreciate the "miracle of America" with some vintage propaganda.