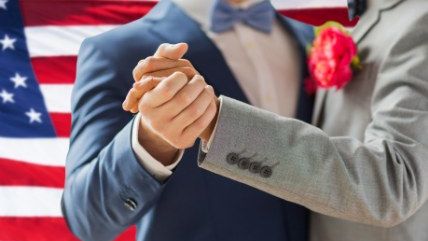 One part of Mississippi's broad bill passed in response in April to the Supreme Court's decision mandating same-sex marriage recognition is in trouble.

Mississippi's House Bill 1523 was passed around the same time as North Carolina's infamous transgender bathroom law. While North Carolina's law was what garnered the most attention and outrage, HB 1523 was a very different and broader creature.

To summarize, HB 1523 appeared on the surface to be a "religious freedom" law, but what it really did was give the government stamp of approval on three particular religious beliefs and only those beliefs: that marriage is between one man and one woman; that premarital sex is bad; and that sexual identity is an immutable birth characteristic.

The bill then forbids antidiscrimination claims in certain public and private areas on the basis of those beliefs. So a baker couldn't be forced to make a wedding cake for gay couple and a therapist or surgeon couldn't be forced to assist with a transgender person's treatment for his or her condition. But a baker could be required to otherwise serve gay customers and a surgeon could be required to operate on transgender people for reasons unrelated to any transitions. Those are just a couple of examples. I wrote more about the details of the law back in April.

The law also forbids Mississippi from punishing state employees for refusing to hand out marriage licenses or solemnizing weddings from same-sex couples, but the courts were required to make sure somebody provided the services when needed. And that's where we hit the problem. U.S. District Judge Carlton Reeves says they can't do that. The Supreme Court ruled that states are required to recognize same-sex marriages, and so states cannot treat gay couples differently from straight couples in that respect. From the Associated Press:

Reeves is extending his previous order that overturned Mississippi's ban on same-sex marriage. He says circuit clerks are required to provide equal treatment for all couples, gay or straight. He also said that all 82 circuit clerks must be given formal notice of that requirement. …

"Mississippi's elected officials may disagree with Obergefell, of course, and may express that disagreement as they see fit — by advocating for a constitutional amendment to overturn the decision, for example," Reeves wrote Monday. "But the marriage license issue will not be adjudicated anew after every legislative session."

Note that this law was different from what passed back in 2015 in North Carolina (over the governor's veto). In North Carolina, legislators decided to give magistrates the authority to legally recuse themselves from handing out marriage licenses over their religious objections. But to avoid the trap of being accused of discrimination against gay couples, the individuals had to forgo performing all marriages or handing out all marriage licenses. Likewise, the compromise solution to Kentucky County Clerk Kim Davis' objection to being ordered to put her name on wedding licenses for marriages she disapproved of was to take the clerks' names off all licenses.

That's not what happened in Mississippi. It specifically set up a system where government officials may treat same-sex couples differently from heterosexual couples, so the federal judge's ruling should come as no surprise at this point.