More than 900,000 People Tuned In to Watch This Week's CNN Libertarian Town Hall 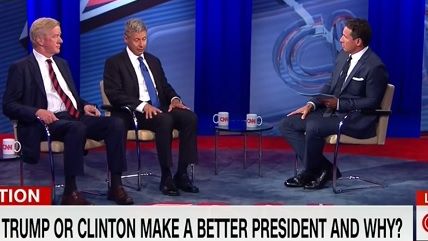 Nearly a million people tuned in to CNN on Wednesday night towatch a town hall with Libertarian presidential candidate Gary Johnson and his running mate William Weld, with 320,000 viewers in the 25-54 demographic, about twice as many viewers as CNN got in the same slot the night before, when it aired a Chris Cuomo (also the host of the town hall) special on the Paris attack investigations, according to Nielsen ratings, but 100,000 viewers less than the regular airing of Anderson Cooper in that time slot the Wednesday before.

The town hall was an opportunity for Johnson and Weld to introduce the Libertarian ticket to a general political news audience. "It can't be bigger," Johnson told Matt Welch before the town hall. "I mean really, this is really, really big." Google searches for Johnson, Weld, and the Libertarian party spiked the night of the town hall. Welch wrote of the town hall that Johnson tried to be "likeable" and "pragmatic," undercutting the latter by going for the former. "Johnson spent too much time communicating his values defensively, sometimes confusingly, while failing repeatedly under cross-examination to draw clarifying distinctions between the theoretically ideal and the politically plausible," Welch wrote.

There have not been any polls taken fully after the town hall. Johnson averages 8.6 percent in three-way match-ups with Donald Trump and Hillary Clinton and 7 percent in four-way match-ups that also include presumptive Green party presidential nominee Jill Stein.