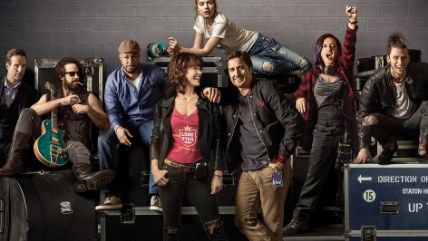 Imagine a workplace comedy set among Peter Pan's Lost Boys, give it a sizzling rock 'n' roll soundtrack, and you've got Roadies, Cameron Crowe's first attempt at a TV series. And, speaking of Lost Boys, welcome back, Mr. Crowe, who seems to have extricated himself from the miasma of inscrutable psychobabble and rock trivia into which he's been mired the past 15 years or so and produced a show that's funny, charming, and occasionally wistful.

Roadies takes place on a national tour by a big-name rock group, but the band itself is barely present on-screen. The show is really about the peanut-butter-and-pizza world of the blue-collar grunts who stage the shows, the riggers and electricians and sound-board techs who sleep in the luggage racks of the buses in which they trek from date to date.

It's a peculiar coterie of misfits and misanthropes—"all the mail, trying to decide what to eat, it's hard" one explains why he can't stay at home—and fraught with fetishes, paranoia, superstitions, jealousies and thwarted romantic ambitions.

Wes (rapper Machine Gun Kelly), just fired from a gig on a Pearl Jam tour, is worried that he'll bungle his new job, wrangling a band member's kid whose enthusiasms run to biting and butterfly knives. Road manager Phil (blue-collar standup comic Ron White) is much beloved by nearly all the crew, and carries a pistol to deal with the exceptions. Tour accountant Harvey (Finesse Mitchell, Saturday Night Live) worries that he'll be ostracized when everybody learns about either his role in a scheme to swipe property of Hurricane Katrina victims ("Victimless crime. Almost victimless.") or that he evaded criminal charges by ratting on another member of the crew ("I'm loyal as hell when I'm not snitchin'.") And production manager Shelli (Carla Gugino, in another of the sharp, witty performances that are marking her as one of the great American comic actresses) is losing her battle with a stalker-groupie whose superpower is humping her way past security in pursuit of multiple objectives of varying unwholesomeness.

More fundamentally, though, is the perpetual identity crisis that's dogged rock and roll at least since the moment that the Who first expressed the (mostly) unfulfilled wish to die before they got old: When are you too old to rock? The question is not entirely chronological. Fortyish tour manager Bill (Luke Wilson) is horrified by the cheerful declaration of a groupie: "You are probably the oldest person I've ever fucked." (Nor is he buoyed by the hashtag on her subsequent tweet about the night, #oldrocks.)

But his fears are shared by Kelly Ann (Imogen Poots, 28 Weeks Later), an electrician half his age who's considering dropping off the tour to go to film school. "I don't hear the music the same way," she broods. "I don't feel like it's mine anymore." It's a frighteningly existential question for people in a line of work where the compensation consists mostly not of cash but the promise—or hope—that "the music is good and you meet some great people," as one of the roadies muses.

If life on the road is an eternal flirtation with the onset of adulthood, the newest wrinkle on the tour is more like a slap in the face: the news that love is not all you need. Bloated expenses and soft ticket sales have caused the suits back home to send a corporate hatchetman out to cut the tour down to size.

Reg Whitehead (Rafe Spall, The Big Short) has little affinity for rock and roll and even less for poetic appeals that it's about music rather than money. "This music is disposable," he coldly warns the roadies. "The same people that love this band now will dispose of this band—and you—for something younger and sexier."

If the result the rest of the way is predictable—yes, yes, the kids will learn a little bit about spreadsheets, and the accountant will discover bongs and backbeats—Roadies is nonetheless a ball. Crowe learned a thing or 300 about rock tours in his days as a wunderkind Rolling Stone correspondent (he was just 16 when he went out for three weeks with the Allman Brothers for his first story) and they're all on display here.

From groupies using microphones in profoundly inappropriate ways to the crew's incantation of its most profane curse— "He's joining the Taylor Swift tour!"—Roadies is a rollicking good time. At the same time, without ever getting stars in his own eyes (if somebody utters a word about "when the music mattered," rest assured they're about to get a fired or take a pie in the face), manages to evoke the magic felt by those who do. Whether you grew up with the Beach Boys, Bruce Springsteen or the Foo Fighters, Roadies and its lovably immature collection of flakes will summon the pure giddy fun of rock and roll. As they used to say on another great rockin' TV show, I'd give it an 85—it's got a good beat and you can dance to it.