'No Fly, No Buy' Means No Freedom

If the government can take away our natural rights to travel and self-defense, can other fundamental rights be far behind? 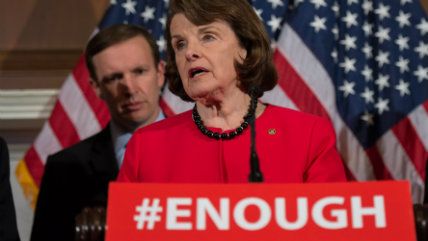 The people in the government who want to control our personal choices are the enemies of freedom. And the enemies of freedom can be very clever and seductive. Last week, these folks, manifesting their lust to keep us dependent upon the government by rejecting the natural right to self-defense, coined a clever phrase: "No fly, no buy." It sounds rational, yet it rejects core American values.

The phrase was pounded home to average Americans during a one-sided 15-hour televised marathon on the floor of the Senate orchestrated by the gun control crowd. The essence of the argument was that stricter laws regarding gun sales would have prevented the massacre at the Pulse nightclub in Orlando, Florida. In gun control advocates' dream world, the self-loathing Islamic State-inspired killer, willing to take 49 innocent lives, would somehow have been unwilling to violate restrictive gun purchase laws; and his obedience to those laws would have saved lives.

Their argument is naive and absurd. A person willing to commit mass murder is surely willing to break the law to acquire the means to commit the murders. So blinded were these senators in their misguided utterances about self-defense that they forgot about the Constitution.

The legislation they offered would have required that people whose names the feds put on a terror watchlist or a no-fly list (these are often done simultaneously) would not be legally able to purchase a gun. The senators summarized this idea dozens of times as "no fly, no buy."

Though this phrase, which was quickly picked up by many of my colleagues in the media, has an easy and simplistic ring to it, it reveals a troubling ideology that profoundly rejects core American values.

When Thomas Jefferson wrote in the Declaration of Independence that we are endowed by our Creator with certain inalienable rights and when the inalienability of our rights was codified in the first 10 amendments to the Constitution, the United States was wedded to the Judeo-Christian principle that our rights stem from our humanity. This was expressly recognized recently by the Supreme Court in District of Columbia v. Heller, in which it held that the right to keep and bear arms is a fundamental personal right, not a gift of the government to a group.

A fundamental personal right is the natural ability of individuals to make meaningful choices without a government permission slip. May the government ever interfere with fundamental rights? The short answer is yes. The longer answer is that it can only do so if it can demonstrate a compelling governmental interest—served by the least restrictive means, and only after due process.

That is what lawyers call black letter law—meaning it is well-established, followed throughout the land and rarely challenged. Until now.

Earlier this week in the Senate, the gun control crowd sought to give nameless and faceless federal bureaucrats the ability to strip Americans of their right to keep and bear arms by putting their names on a terror watchlist/no-fly list and prohibiting those on the list from buying guns. Yet none of these senators could state the criteria for putting a name on that list, and none could identify the people who prepare or keep the list.

That's because these are well-guarded government secrets—secrets that have no place in American life.

If a government bureaucrat can put your name on a secret list on the bureaucrat's own whim or even using secret standards and, as a result, you have lost a fundamental liberty, then the feds have transformed a natural right into a governmental gift. If the feds can create a no-fly list in secret and "no fly" comes to mean "no buy," then we have no rights but what the government will permit us to do.

As if to underscore his ignorance of American values, one of the senators even stated that due process is killing us. He must have forgotten his oath to uphold the Constitution, which guarantees that the government may not take life, liberty, or property without due process.

Due process—the absolute right to know the law and to force the government to prove a violation of it to a jury before it can take life, liberty or property—is the essence of the rights of free people. It is utterly scandalous—and probably disqualifying from office—that a senator could bemoan its existence.

Can you see how low we have sunk? The gun control crowd doesn't care about personal liberty in a free society; it just cares about control. It wants us all to be pliant and reliant on a government that it controls; never mind that it is utterly incapable of protecting us from crazies who will resort to mass death for their own deranged purposes.

If the government secretly can put an American's name on a secret list and, as a result, his liberty is lost, then there are no freedoms—just government-granted privileges. And if it can do this to the natural rights to travel and self-defense, can other fundamental rights be far behind?