Johnson's ideas have appeal, but he needs to communicate them better. 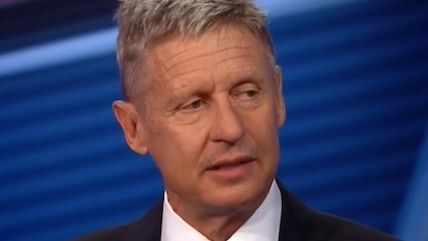 It was a big night for the Libertarian Party. CNN aired a special townhall event with the two former Republican governors heading up the ticket: Gary Johnson and William Weld.

Johnson, unfortunately, was underwhelming. He struggled to explain his philosophy to voters who don't already grasp it. Weld fared much better, although he almost made Johnson look worse by comparison.

Even so, there couldn't have been a more perfect time for the libertarians to make their case to non-crazy Americans. "We reject the extremes of both parties," said Weld. This might as well have been the theme of the evening. As I wrote in a column for The Daily Beast:

As Johnson and Weld spoke to CNN viewers, a curious spectacle was unfolding in the House of Representatives where Congressional Democrats, led by former civil rights icon Rep. John Lewis, staged a sit-in to demand federal action on gun control. Specifically, they want Republicans to sign off on a plan, supported by President Obama and Democratic presidential nominee Hillary Clinton, that would prohibit citizens on the no-fly list from purchasing firearms.

Such a policy would obviously violate the Constitution, which stipulates that the government may not deny citizens' their rights—and like it or not, gun ownership is a right, according to the Second Amendment—without due process. Putting someone on a watch list does not constitute due process, which is why the idea is vehemently opposed by the American Civil Liberties Union.

But extremism in opposition to liberty is not solely the province of the Democratic Party—not remotely. Earlier this week, Republican leadership began scheming to approve new surveillance powers for the FBI. If Senate Majority Leader Mitch McConnell gets his way, the agency would be able to monitor online activity without seeking warrants.

In the wake of national tragedies like the horrific mass shooting at Pulse nightclub in Orlando, Republicans and Democrats alike retreat to their preferred policy solutions, which would invariably punish vast swaths of people—be they immigrants, gun owners, or Muslims—for the misdeeds of a few. Neither party cares very much about civil liberties when civil liberties are inconvenient.

Johnson and Weld, however, are a breath of fresh air for Americans who want the government to consistently respect their rights.

Read the full thing here, and watch Reason TV's recap of the townhall below.