If Politicians Were Controlled by Space Aliens, Would We Notice?

Kang and Kodos go to Washington in new CBS show. 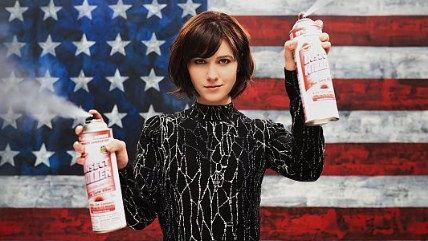 The only real question about BrainDead is which CBS division produces it: news or entertainment. Because in the epoch of Donald Trump, Hillary Clinton, and Bernie Sanders, a show in which space aliens bore holes in the brain of Washington politicians and cause them to spout gibberish sounds more like an extension of 60 Minutes than the pulpy, black-humor sci-fi drama that BrainDead purports to be.

Not that BrainDead isn't bleakly hilarious, to a pee-your-pants-laughing degree, and drive-in-movie creepy. It sooooo is, and it's the show of the summer and possibly of the year. But not since The Werewolf Of Washington popped up during the 1973 summer of Watergate has Hollywood captured the moment's political gestalt with such deadly accuracy.

Interestingly, husband-and-wife producers Robert and Michelle King—the team that created the political-legal drama The Good Wife—sold BrainDead show to CBS back in the fall of 2014, when even the most cynical detractors of American politics could not have foreseen that the next presidential campaign would fought out among a scandalophiliac liar, a stage-four Tourette's victim, and a raving Vermont socialist who apparently clawed his way out of a 1968 time capsule.

But the Kings seized their moment when it came. BrainDead plays out against a constant background of cable-news reports about small hands, Mexican walls and errant emails that blur the line between reality and fantasy into a dark, nutball smudge. Seriously: Didn't Chris Christie, standing behind Don Trump on the podium on Super Tuesday, look a little bit like parasites were gnawing on his brain?

BrainDead's protagonist is Laurel Healey (Mary Elizabeth Winstead, the resourceful young hostage of 10 Cloverfield Lane), the daughter of a Washington political family who fled to make documentaries that are all unfinished, unfunded, and likely to remain that way barring an astonishing upsurge in public thirst for knowledge about the religious hymns of the Solomon Islands.

Though she detests politics, Laurel makes a deal with the devil—her Washington kingmaker dad (Zach Grenier, The Good Wife)—to take a job on the staff of her Democratic senator brother Luke (Danny Pino, Cold Case) in return for money to complete her films.

First assignment: case work with constituents jousting with the government over everything from better access to national parks to Obamacare ("It's a rash, not a preexisting condition!") The oddest—well, second-oddest, behind a guy who wants to give the senator a life-size sculpture made of chocolate—is a woman who insists "My husband Randall, he's not my husband anymore."

That scene is either an homage to, or a theft from, the 1956 film Invasion Of The Body Snatchers and it's not the last one. BrainDead is like a mirthful, manic handball game between Don Seigel's paranoid classic (an allegory on either McCarthyism or creeping communism, take your pick) and Frank Capra's mushhead-civics epic Mr. Smith Goes To Washington.

The intergalactic body snatchers aren't the pods of Siegel's film, but I don't want to spoil your spontaneous screech of "Yeccch!" by giving away their precise modus manducandi; suffice it to say that by the end of the first episode, you'll wish those "orifice-protection systems" we used to see in mock National Lampoon ads were real.

Like Siegel's bodysnatchers, BrainDead's render their hosts sexually indifferent; but in a marked difference, they become not lazily mellow, but more combative, at least where politics are concerned, chanting meaningless ideological factoids ("Did you know Denmark's child-poverty rate is like a quarter of America's?") up to the point, and sometimes past it, where their heads explode. (Imagine a "scenes we'd love to see" of a Crossfire-like show.)

But BrainDead's cynical mockery of American politics begins well before the aliens creep into the scene. "What is a Democrat these days? What is a Republican?" asks an oily GOP senator trying to persuade a Democrat to switch parties and deliver him control of the Senate. "You ate Cheerios this morning, you'll eat Wheat Chex tomorrow."

No scripted series has ever been more riotously contemptuous of Washington verities. If H.L. Mencken himself were reincarnated as a TV screenwriter, I don't think he could have come up with the scene in which the naif Laurel, appalled by a discussion of how to best smear an opponent, blurts "Why don't you just say she kills puppies and call it a day?"… and then watches in appalled silence as they do just that.

Laurel herself personifies the infectious corruption of the system. On her very first day of work, she learns that her brother is both a personal and political sleazebag, cheating on his pregnant wife while contriving with Republicans to stage a government shutdown that each party believes can be successfully blamed on the other.

But within the week, her dorky idealism proves no match for her skanky political genes; she discovers a profound aptitude for manipulation and espionage. What's more, she kind of likes it, beaming prettily and only slightly shame-facedly as another aide congratulates her—"Your first leak!"—after she plants a scabrous story in the press about a rival pol.

Winstead, who started her career with a series of doomed-ingenue roles in grade-Z horror pics (her improbable breakout came after Jay Leno, in one of his candid-camera "Jaywalking" stunts, knocked on her apartment door without knowing she was an actress and invited her to appear in a quickie slasher spoof for The Tonight Show) certainly cements the claim to leading-lady status she established in 10 Cloverfield Lane. Her performance in BrainDead is smart, funny and casually sexy. She strikes a considerable spark with Aaron Tveit (Graceland), who plays a Republican aide who is first the object of her political espionage and then her affections.

In fact, the cast of BrainDead is uniformly excellent, including Johnny Ray Gill (Underground) as an Internet conspiracy theorist (his exposes include one headlined THE TRUTH BEHIND THE MAPLE SYRUP SMELL IN NEW JERSEY) and expert on insect flatulence and Paige Patterson (Hell On Wheels) as a legislative aide who is a lock for an Emmy for Best Resting Space-Alien Bitch Face.

Junior G-Man Crimestopper Tip: BrainDead victims of body-snatching aliens can often be spotted through their obsessive listening to the 1984 Cars record You Might Think, which bolsters the long-standing Baby Boomer theory that Gen X is the weak link in humanity's genetic chain.