Some want to legally target those who donate to think tanks that encourage skepticism. 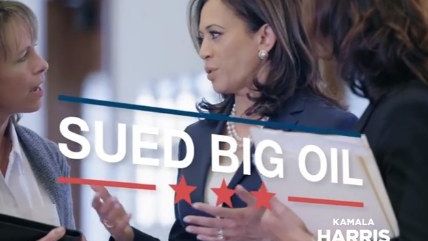 California Attorney General Kamala Harris is promoting herself in her Senate run by talking about fights against "big oil" and for the big financial settlements she helped arrange in the wake of the housing bubble bursting (though her claim that she has gotten billions for "homeowners" is not quite accurate).

During her stint as attorney general, Harris made sure to send out a press release for any settlement or lawsuit targeting corporate or business interests, as well as for any sex trafficking or "revenge porn" cases. Sometimes there have been ethical issues with how these cases have been pursued in attempts to get paydays for the state (and Kamala's office). I highlighted a particularly nasty case in 2015 where a federal court intervened in an attempt to hold a lumber company responsible for a wildfire that may well have been started by a government official. Federal judges have blasted California prosecutors for misconduct and the presentation of false evidence in trials.

I'm dredging all this up not just to remind folks of Harris' record, but because the state actually appears to be mulling over legislation to expand opportunities for the state to go after corporate interests and claim that it's all for the benefit of the environment. Walter Olson (a Cato fellow and Reason contributing editor) takes note in his Overlawyered blog that there's a bill under consideration that would revive possible lawsuits against businesses that the state believes were deliberately concealing evidence of global warming in the past. These are cases that the state could currently not pursue because the statute of limitations for these alleged violations has passed. As Olson points out, this is all in connection with the effort by some states to launch an environmental inquisition against critics of various approaches to dealing with climate change:

Combined with the plans laid by California Attorney General Kamala Harris — part of the alliance of AGs that has sought to investigate not only oil, gas, and coal companies, but private advocacy groups and university scientists who have played a role in what is characterized as "climate denial" — the bill would begin laying the legal groundwork for an astonishingly broad campaign of inquisition and, potentially, expropriation. The bill was approved by a subcommittee and was further amended May 10 to provide that climate science-related claims of any age would begin a four-year reviver period as of next January. [Northern California Record; the left-leaning Union of Concerned Scientists has a piece supporting the bill]

Section 2(b) of the bill declares it the California legislature's policy to promote "redress for unfair competition practices committed by entities that have deceived, confused, or misled the public on the risks of climate change or financially supported activities that have deceived, confused, or misled the public on those risks" [emphasis added] — a very clear signal that the target is public issue advocacy, and not merely (say) advertising that is directed at consumers in their capacity as buyers of gasoline at the pump. Last month, a federal court slapped down, as an unconstitutional burden on First Amendment rights, California Attorney General Kamala Harris's demand for the donor lists of nonprofits that carry on operations in California.

Reason's West Coast headquarters are in Los Angeles, and the Reason Foundation (which publishes this site) was listed among the subpoena targets in this effort to find people to punish for arguing in favor of "wrongthink." Needless to say, despite the fact that our science correspondent Ron Bailey is no climate change "denialist," it doesn't matter how he describes himself. What matters under this law would be how the California government perceives our history of writing about climate change, along with their perceptions of other think tanks and corporate interests in the state.

Also note the emphasis of attempting to reclassify speech and opinions as "business practices" in order to try to get around the First Amendment. Perhaps the greater concern to Reason and other think tanks is not that the state will attempt to attack us directly but will attempt to attack donors (particularly large business or corporate donors) on the basis of them giving us money.

Consider the larger consequences. I've written in opposition of using the law to forbid psychological conversion therapies to "cure" gay and transgender citizens. It's not because I believe this therapy works or is morally correct. In fact, I think it's the opposite. But it's a form of speech, and legally banning it puts the government in power of determining what positions in the constantly evolving field of psychology are valid. Regardless of the reasons behind my position, California has banned conversion therapy for minors. Does this mean that I have endorsed what the state of California has determined is an "unfair business practice"? Using the logic of this law, could the state end up in a place where they'll go after businesses who have donated money to Reason on the basis of what I've written?

Not only is this an attempt to try to find new ways to extract money from corporations and businesses, it is also clearly an effort to discourage these interest groups from donating money to nonprofit political organizations and think tanks that may oppose the positions held by those in the state who wield the most power.