Let students join fraternities if they want to. 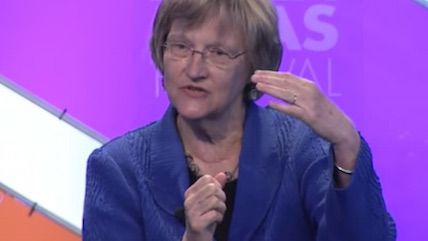 (Screenshot via The Aspen Institute)

Twelve members of Harvard University's faculty have filed a motion in opposition to the university's new policies, which punish students for joining single-sex clubs and private fraternities.

These professors include psychologist Steven Pinker—author of The Better Angels of Our Nature: Why Violence Has Declined—and former Harvard College Dean Harry Lewis.

"Harvard College shall not discriminate against students on the basis of organizations they join," the proposal reads.

According to The College Fix:

The resolution is a shot across the bow for the administration, which would need faculty approval to implement the sanctions policy if it requires a change to the student handbook.

Faculty leaders interviewed by the Crimson said they weren't consulted before the school announced the new policy.

Earlier this month, Harvard President Drew Faust announced that students who joined single-sex organizations would be subject to punitive measures. They would be ineligible for certain scholarships and could not accept formal leadership roles in official campus groups. The policy is intended to quash the existence of politically disfavored extracurricular groups, like fraternities. It will also hurt female-only clubs.

As I wrote previously:

Harvard is a private organization, and is entitled to place as many ridiculous limitations on students' lives as it wants. But it doesn't get to discriminate against students who join finals clubs while simultaneously touting itself as an institution that respects liberal values. There's nothing liberal about discouraging free association.

Good for the faculty for resisting this misguided crusade.