Milo Yiannopoulos Assaulted By Crazy Student Protesters at DePaul, Cops Do Nothing

Free speech for me, violence for thee. 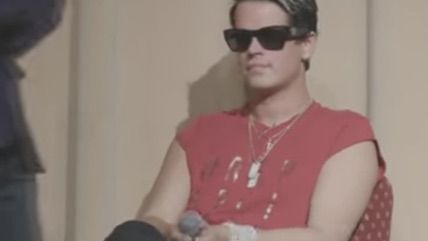 DePaul University Black Lives Matter protesters shut down a Milo Yiannopoulos event on Tuesday night. They justified their illiberal actions on grounds that Yiannopoulos's speech spreads hate and violence—which, incidentally, is true, given that the students retaliated by literally attacking him.

In video footage of the event, a female protester can clearly be seen striking Yiannopoulos in the face. This took place during the Q and A, which was interrupted by the female student and another activist, student Edward Ward. They were joined by ten other irate students. Yiannopoulos's supporters tried to stop them, and police and security were called.

But neither the police nor campus security did anything to stop the activists. This was ironic, because DePaul had forced the College Republicans to pay several hundred extra dollars for security for the event, according to The College Fix.

Again, the implication that there is a direct, causal relationship between offensive speech and violence is ironic, because the protesters were the ones using violence to threaten someone they didn't agree with. We must use violence to prevent speech we dislike from causing violence should not be a particularly compelling line of reasoning.

As I've frequently noted, Yiannopoulos is a Trump supporter, not a libertarian. I don't agree with many of his views, and some of his most vocal online supporters are truly awful. But we ought to defend his right to speak his mind at a public forum at a university campus, especially when specifically invited to do so by a campus political group. We ought to defend the rights of all students to grapple with ideas that are controversial. Tactics used to thwart Yiannopoulos, including the heckler's veto, can and will be unleashed on other speakers. If the academy is not a place where freedom of expression is protected for everyone, it's not a "safe" space at all.

After the protesters wrecked the event, Yiannopoulos led his followers to the president's office and demanded the university take punitive action against Ward. "Will DePaul have the courage to discipline Edward Ward for his behaviour?" he asked, according to Breitbart.

Yiannopoulos has asked the university to refund him the $1,000 he paid in extra security fees, which seems fair. Requiring would-be speakers to pay for security, and then failing to protect them when security is actually required, is unbecoming of an institution that claims to value free speech.