The University of Oregon's Thought Police Investigate Students for Saying Anything

A fascinating, frightening glimpse into the activities of the Bias Response Team. 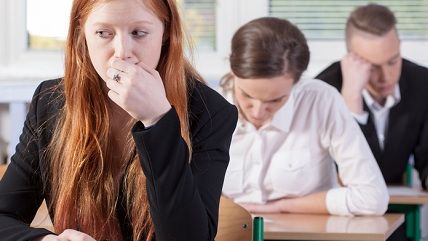 What happens when members of a university community allege that they were victims of a â€œbiasâ€ incident? A team of administrators interveneâ€"no matter how petty the complaint.

An annual report on the activities of University of Oregonâ€™s Bias Response Team provides a frightening yet fascinating glimpse into the practices of these organizations, which are common on college campuses. Students, faculty, and staff who feel threatened, harassed, intimidated, triggered, microaggressed, offended, ignored, under-valued, or objectified because of their race, gender, gender identity, sexuality, disability status, mental health, religion, political affiliation, or size are encouraged to contact the BRT.

The team is composed of seven administrators, which include Oregonâ€™s â€œmulticultural inclusion support specialist,â€ LGBT director, and â€œNative American Retention Specialist.â€ The BRTâ€™s goal is to eradicate bias on campus, making Oregon a safer place. Bias is defined as â€œany physical, spoken, or written actâ€ that targets another person, even unintentionally. The teamâ€™s posters propose examples of bias incidents: statements like â€œThanks, sweetie,â€ and â€œI donâ€™t see color,â€ apparently qualify. (The former is patronizing, the latter is simply wrongthink, I guess.)

If youâ€™re not sure what exactly the BRT does, its annual report includes a helpful Logic Model. Think Silicon Valleyâ€™s â€œConjoined Triangles of Successâ€:

Actually, thatâ€™s not very helpful at all, is it? Not to fear: the report also includes summaries of all 85 of the incident reports filed last year. The BRT documented the nature of every complaint, categorized it, and recorded what response was taken. A thorough review of these summaries suggests to me that the BRT is essentially an administrative thoughtpolice that routinely intervenes in situations where one studentâ€™s constitutionally-protected speech has offended another student. The team is also not shy about referring its cases to university agencies with more robust enforcement powers.

A staff member reported that a poster featured a triggering image.

Response: Reported for information only. A BRT Advocate offered support to the

This doesnâ€™t seem like an â€œincidentâ€ at all. Public university students do not have the right to live free of bothersome postersâ€"especially in this case, where it seems likely the poster was subjectively offensive to a single person, for reasons having to do with that personâ€™s body size.

But itâ€™s important to note that the BRT didnâ€™t censor the poster: it merely offered counseling to the person who complained. No oneâ€™s free speech rights were trampled.

Sadly, this was not always the case.

Response: A BRT Advocate reached out to the reporter. A BRT Case Manager

met with the president of the student program to discuss the incident.

Response: A BRT Advocate spoke with the reporter, and a BRT Case Manager held

an educational conversation with the president and the advisor of the group.

A student reported that a professor wrote an insulting comment on their online blog.

Response: A BRT Advocate met with the reporter, and a BRT Case Manager held a

professional development conversation with the professor.

In these cases, the BRT actually met with the persons accused of perpetrating a bias incident. It should go without saying, but none of these incidents are worthy of an investigation led by university administrators. Students have the right to throw parties, even if those parties are culturally-appropriative. Students have the right to make derogatory statements on Facebook. Professors have the right to post critical comments on blogs. Students do not give up their most basic First Amendment rights when they enroll at Oregon, and professors are entitled to broad academic freedom protections.

And although the BRT evidently lacks the power to sanction the offenders, that might not have been clear to students who were accused of bias and made to have a chat with campus officials working for the Dean of Students. Did the student who hosted the appropriative party know that he wouldnâ€™t and couldnâ€™t be punished for doing so?

Then there were the cases where the alleged victim of the bias incident wasnâ€™t even the one who reported it:

inappropriate questions and did not refer to them correctly.

Response: A BRT Case Manager contacted the appropriate supervisor, who

conversation with the coworker.

Can you imagine being approached by your supervisor and told that university administrators were looking into your alleged mistreatmentâ€"mistreatment you never reported, and may not have even considered to be mistreatment in the first place?

Next were the cases where the BRT essentially informed on the alleged bias perpetrators, reporting them to other authorities:

A staff member reported that residents made inappropriate gender-based comments.

remark while facilitating a training.

Response: A BRT Case Manager referred the case to the Dean of Students.

An anonymous student reported that a professor made a joke about sexual assault.

Response: A BRT Case Manager referred the case to the Offi ce of Affi rmative

Jokes and insensitive remarks were deemed serious enough for Sexual Violence Support Services, the Dean of Students, and the Equal Opportunity office.

Next were the cases where BRT itself took ridiculous actions:

A student reported that a sign encouraging cleaning up after oneself was sexist.

Response: A BRT Advocate met with the reporter and empowered them to

removed, and the program staff had an educational conversation about the issue.

trans students and students of color.

Response: A BRT Case Manager held an educational conversation with the

Yes, university administrators had â€œan educational conversationâ€ with student-journalists about what kinds of stories they should be printing.

Needless to say, the activities of the Bias Response Team should be concerning to anyone who values free speech at Oregon.

â€œItâ€™s troubling to see the university policing and micro-managing studentsâ€™ every day interactions,â€ Azhar Majeed, an attorney at the Foundation for Individual Rights in Education, told me. â€œOne can imagine the chilling effects this would have.â€ (Majeed has also written about bias incident policies for The Huffington Post.)

I contacted both the BRT and the office of the Dean of Students. Neither responded to requests for comment. I will update this post if they do so.

The bias summaries donâ€™t include all the details. It may certainly be the case that some of these incidents were truly concerning, and that the BRT provided a worthwhile resource. But thereâ€™s something positively Orwellian about vesting administratorsâ€"not faculty, but administratorsâ€"with the responsibility to tell students what they should and shouldnâ€™t say. These â€œconversationsâ€ the BRT sponsors reflect a massive power imbalance between students and administrators, since the administrators appear to have the authority to punish the students.

What right-thinking student, having been informed that he is a person of interest in a bias incident, would dare rebuff a member of the BRT who wants to have a conversation about his conduct? Would a student in such a situation feel like he could invoke his First Amendment rights without facing reprisals?