Gary Johnson Pitches Himself as Independents' Choice for President

Who represents the majority of Americans who don't affiliate with a party? 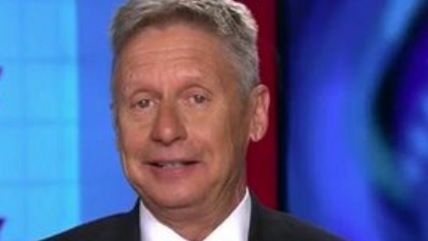 Libertarian presidential front-runner and 2012 nominee Gary Johnson, who was the Republican governor of New Mexico from 1995 to 2003, appeared on ABC's This Week with George Stephanopoulos to make a pitch to Americans dissatisfied with Donald Trump and Hillary Clinton, the presumptive Republican and Democratic presidential nominees.

Asked whether he saw conservative talk about a potential third-party candidacy to repudiate Trump as a threat or opportunity, Johnson insisted it was a "real opportunity" because "Clinton and Trump are the two most polarizing figures in politics today."

Johnson noted that more than 50 percent of Americans identified as independent. "I happen to think they're libertarian but don't know it," Johnson said. Many Americans, according to Johnson, were looking for "fiscally responsible, fiscally conservative, small government and then individual choices—freedom, liberty." People believe they "should be making choices in their own lives, not the government."

Stephanopoulos asked Johnson for his "direct pitch" to "never Trump conservatives," but Johnson said he had a "direct pitch to everybody," the website isidewith.com. "Take the political quiz and at the end… you get paired up with the presidential candidate most in line with your views."

"Shouldn't you find out who you most pair up with and then just knock yourself out supporting that candidate?" Johnson asked.

Johnson also disagreed that he would pull more votes from Donald Trump than Hillary Clinton as a presidential candidate, pointing to

a Monmouth poll that showed him "taking" more votes from Clinton than Trump. "At the end of the day, 50 percent of Americans say they're independent. Well, where's their representation?" Johnson asked. "I think it happens to be Libertarian."

Stephanopoulos mentioned Johnson's 2012 finish—a million voted—and asked whether Johnson needed more reach and more money to do better than that.

"It's a real chicken and egg thing," Johnson replied. "If you're not in the polls, of course, you don't get the attention." Johnson also pointed to the Presidential Debate Commission, which was "at the heart of why this system is so rigged." Johnson has to clear 15 percent in the polls to appear in the presidential debates, but it's hard to hit that number if you're not in the debate.

Stephanopoulos brought up Ross Perot making it into the presidential debates in 1992 and Johnson noted that "that's when the League of Women Voters backed out, saying that the whole thing is a rigged game and that's when the Presidential Debate Commission moved in."

"You gotta be in the polls, for starters," Johnson said. "Come the fall, it wouldn't be surprising to me to say well, Gary Johnson, he wasn't polling well at all. Well, the fact will be that I wasn't in the polls."

Johnson was also asked about his admitted marijuana use and whether he'd stop if he were elected president. Johnson said he would and then used the question as a segue to talk about legalizing marijuana.

"Legalizing marijuana recreationally will lead to less overall substance abuse," Johnson argued, "because people are going to find it as such a safer alternative than everything else that's out there, starting with alcohol."

It would also help with ending the drug war. "There are tens of millions of Americans who are convicted felons in this country that but for our drug laws, would otherwise be taxpaying, law-abiding citizens," Johnson said.

The interview ended with a question from Stephanopoulos about who Johnson would choose between Trump and Clinton if he were forced to. Johnson said he'd been voting Libertarian "a long time."

"I'm always believing that there's going to be a libertarian on the ballot," Johnson insisted.