Harvard Will Punish Students Who Join Fraternities Because They're 'Privileged'

Free association is a liberal value, but not at Harvard. 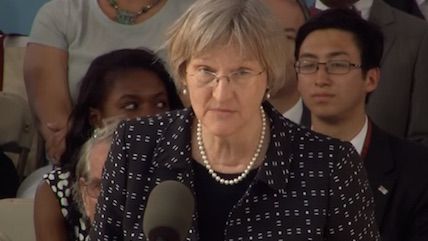 Harvard University President Drew Faust has made the shameful decision to punish students who want to join male-only and female-only clubs.

Beginning with the class of 2021, all students who join single-sex finals clubs—Harvard's unofficial version of fraternities and sororities—will be ineligible for the Rhodes and Marshall scholarships. They will also be prohibited from holding leadership positions in official campus organizations, and on sports teams.

Faust framed the decision as a necessary step to combat "forms of privilege and exclusion at odds with our deepest values."

"The College cannot ignore these organizations if it is to advance our shared commitment to broadening opportunity and making Harvard a campus for all of its students," she said, according to The Harvard Crimson.

The decision to go after the finals clubs is partly a response to Harvard's sexual assault task force, which labelled the organizations a threat to public safety—even though the overwhelming majority of reported rapes at Harvard took place in the dormitories.

Dean Rakesh Khurana, who recommended punitive measures against single-sex clubs, suggested that the new policy could be relaxed if the clubs start admitting members of both genders. That's a bit confusing, though, if the stated goal is to reduce sexual assault at club activities: are co-ed fraternities more or less likely than single-sex clubs to be breeding grounds for rape?

Reading between the lines, it seems like "reducing sexual assault" is actually just an excuse for Harvard to take action against groups it doesn't like—for reasons that are implicitly political.

"[The] unrecognized single-gender social organizations have lagged behind in ways that are untenable in the 21st century," Khurana told The Crimson.

That's it: Harvard's leadership doesn't think the clubs are progressive enough. It's decision to bring them to heel, however, is stridently anti-liberal. It violates students' free association rights and creates an affiliations litmus test for participation in campus life. It punishes students for organizing themselves into groups that share common interests.

"Outrageously, Harvard has decided that 2016 is the right time to revive the blacklist," said Robert Shibley, executive director of the Foundation for Individual Rights in Education (FIRE), in a statement. "This year's undesirables are members of off-campus clubs that don't match Harvard's political preferences. In the 1950s, perhaps Communists would have been excluded. I had hoped that universities were past the point of asking people, 'Are you now, or have you ever been, a member of a group we don't like?' Sadly, they are not."

It's also stunningly impractical. Harvard's unofficial clubs are, well, unofficial. They don't need to keep members' lists. Many of them are quite private.

The administration now has the difficult and Orwellian task of creating a committee that will enforce the new policy. To be effective, it will have to investigate students it suspects of joining disfavored secret clubs.

Harvard is a private organization, and is entitled to place as many ridiculous limitations on students' lives as it wants. But it doesn't get to discriminate against students who join finals clubs while simultaneously touting itself as an institution that respects liberal values. There's nothing liberal about discouraging free association.