The other motion picture inspired by High-Rise 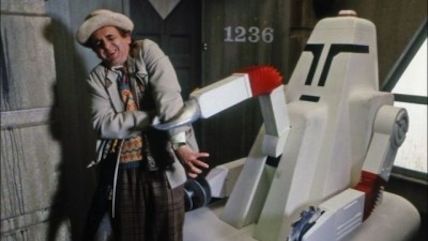 J.G. Ballard's High-Rise doesn't usually pop up in those lists of libertarian-themed science fiction stories, but the 1975 novel contains a lot for anti-authoritarians to enjoy. The tale of a luxury London apartment complex that degenerates into tribal warfare, it's a brutal little fable about the gap between a planner's blueprint and the space that actual people live in. Ballard turns Hobbes on his head: Here it is a highly centralized, tightly designed society that degenerates into a war of all against all.

The book is also drily funny, with one of my favorite opening lines of the last half-century: "Later, as he sat on his balcony eating the dog, Dr. Robert Laing reflected on the unusual events that had taken place within this huge apartment building during the previous three months." That sets the tone for the text right away: If you like that sentence you will probably like the rest, and if you don't you can safely stop there.

High-Rise has inspired two motion pictures. One is a new movie helmed by the British director Ben Wheatley. I haven't seen that yet. The other is one of the most bizarre serials in the history of the long-lived science fiction series Doctor Who.

Wheatley has directed a couple of recent Doctor Who stories, but this wasn't one of his efforts. It dates back to the late '80s, when the show's original incarnation was sputtering toward cancellation and hardly anyone was watching it anymore. In its final years the program took an experimental turn, and one of its odder experiments was Paradise Towers, a story that basically inserted the show's protagonists into Ballard's book. Or, rather, it inserted them into a deeply weird variation on Ballard's book, with some of the hammiest supporting actors in BBC history delivering their lines on sets that looked like they cost about £45 apiece to build. In the words of one critic, Paradise Towers is "a Ballardian dystopia performed as broad-stroked children's television."

How could you not want to watch that? Or, if your patience for low-budget sci-fi absurdism is limited, don't you at least want to check out a few minutes of it? Here is the first episode of the four-part story. You can start from the beginning or, if you prefer, you can jump to 10:45 and watch a caretaker being attacked by a cleaning robot:

Part two is here, part three is here, and the conclusion is here. My colleague Kurt Loder's review of Wheatley's High-Rise is here. (He wasn't impressed.) Reason's 2009 tribute to Ballard is here. Past editions of the Friday A/V Club are here.