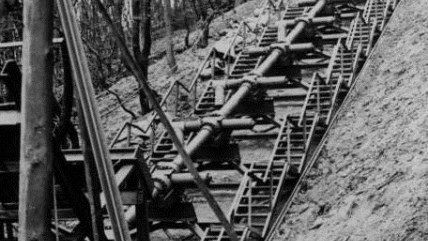 The greatest unsolved mystery about World War II is what else television could possibly have to say about it. From the old CBS documentary series The Twentieth Century (11 of the 18 episodes of the inaugural 1957-58 season were devoted to the conflict) to Ken Burns' 14-hour 2007 opus The War, it sometimes seems that every bullet fired has had its 15 minutes of fame.

Yet nearly every afternoon, you can find the History Channel or the National Geographic Channel or one of their rivals exploring new nooks and crannies. Seriously: Hitler and the Occult; Nazi UFO Conspiracy; and soon, I'm sure, we'll see The Third Reich and Ted Cruz's Dad.

The latest, and not nearly so ridiculous, entry in this marathon is Bombing Hitler's Supergun, an episode of the PBS documentary series Nova. It's a brisk recounting of Hitler's attempt to build a cannon that could hit London from France, one of many superweapons conceived in a final desperate attempt to stave the end game in the grim final days of World War II.

Unlike its cousins, the V-1 flying bomb or the V-2 guided missile, the V-3 supergun never got to an operational stage. Except for a few rounds fired as the German offensive at the Battle of the Bulge collapsed in early 1945, it remained entirely theoretical. The only reason it's more than a footnote to a footnote is that American and British efforts to derail plans for the V-3 cost the life of a young American bomber pilot named Joseph Kennedy, possibly altering the course of U.S. history.

As Supergun capably explains with a combination of rare military archival footage and crackerjack graphics, the V-3 was to have 25 barrels, each 130 meters long and capable of lobbing high-explosive shells for about 100 miles.

Hitler and his commanders envisioned the V-3 raining 300 rounds an hour on London 24 hours a day from an underground complex in Mimoyecques, France, just five miles inland from the coast. Such "artillery warfare on an industrial scale," Hitler predicted, would surely shatter British morale and implode the Allied war effort.

The supergun, however, faced both daunting engineering challenges—among other things, the Germans found that barrels that length droop under their own weight—and powerful countermeasures from the Allies. In spring 1943, British analysts examining aerial reconnaissance photos had spotted new railroads vanishing into caves around Mimoyecques and were certain some kind of new weapon was housed there. They pounded the daylights out of the area with conventional bombs—aerial photos displayed in Supergun make it look like a moonscape—and, when that didn't seem to be working, unleashed a new bomb that burrowed underground before exploding, triggering earthquakes.

Yet still there was no certainty that the new German weapon had been put out of commission. So American forces launched their own mission: the first remote-controlled drone weapon.

On August 12, 1944, they loaded 12 tons of explosives into a bomber and rigged the cockpit with primitive TV cameras that would allow the plane to be controlled via radio by a pilot in a trailing aircraft. But a human being still had to be at the controls at takeoff; once the bomber was safely in the air, he would bail out. That was the job of Lt. Kennedy, the youthful American political heir whose father was determined would be president.

It's hardly necessary to offer a spoiler alert that the mission went awry; the details of what went wrong, as best anyone can tell, are well told in Supergun. So is the chilling postscript, that the mission should never have taken place, twice over.

A young electronics officer had warned that the bomber's firing panel was badly and dangerously designed, but was overruled by his superiors. Even more fundamentally, Canadian troops overran Mimoyecques three weeks later and discovered nothing but rubble. The British earthquake bombs had completely wrecked the firing bunkers. All that was left were the entombed corpses of a few hundred slave laborers and a series of what-ifs that, however faintly, echo around us to this day.