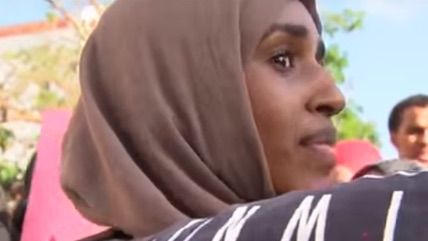 San Diego State University students are furious with their president—and some think he should resign—because he failed to protect them from hurtful words printed on campus flyers.

Members of the Muslim Student Association surrounded President Elliot Hirshman's vehicle last week and trapped him in place for an hour. They demanded that he apologize for issuing an inadequate denunciation of a pro-Israel flyer. The spectacle bore some similarity to the persecution of Yale University's Nicholas Christakis last fall, who was surrounded by irate students and accused of refusing to protect them from offensive Halloween costumes. Christakis's job was to "create a place of comfort" for students, the protesters claimed.

Similarly, the anti-Hirshman crowd maintained that it was his job to harshly denounce speech that offended them. But the speech in question, a flyer, was obviously protected political expression. The flyer accused anti-Israel students of sympathizing with Hamas and allying themselves with Islamic terrorists. It also listed the heads of SDSU's pro-Palestinian group by name. That's a harsh tactic—and an obvious example of hyperbole—but left-leaning campus activists often do the same to their conservative and libertarian opponents, and it is simply not the case that putting someone's name on a list is the same thing as threatening or harassing them.

The flyers are a production of the David Horowitz Freedom Center, a pro-Israel group. Horowitz defended their content in a statement to The College Fix, saying, "They're not ignorant college kids. They're willing and committed campus agents of Hamas. Big difference. We singled out the leaders of an organization founded by members of the Muslim Brotherhood whose sole mission so to spread Hamas' genocidal lies about the Jewish state and spearhead the Hamas-inspired and Hamas-funded BDS campaign which is a genocidal campaign to strangle the Jewish state. Calling them innocent would be a insult to their intelligence and malice."

"My friends are not terrorist, and if their names are being posted around campus that's an issue of security," one student, Jeanette Corona, told The San Diego Union Tribune. "No student should be demonized. … It's (Hirshman's) job to ensure the safety of all students on this campus."

"We wanted the president to come to our defense as students," said another student, Osama Alkhawaja, whose name appeared on the flyer.

But Hirshman did come to their defense, as best he could. He sent a campuswide email noting that everyone had a right to make controversial statements, asked for civility, and questioned whether naming individual students was an effective tactic. That's all he can do. Anything more would have given the false impression that students aren't free to put up controversial flyers.

It wasn't enough for the Muslim students, who launched a petition yesterday calling on Hirshman to resign. According to the petition:

"It is the Job of the President of any body of people to make sure that those people feel safe and secure but in this case Elliot Hirshman didn't do that," said President of National Action Network Reverend Shane Harris.  "Even after we gave him 48 hours to condemn the hate speech on those flyers he didn't do that which is why he must go."

Keep in mind that the students who surrounded Hirshman last week didn't just engage him in a dialogue: they actually prevented him from leaving. When he finally got out of the car, apologized, and tried to leave, they began chanting insults at him.

I can understand why pro-Palestinian students were upset to learn that Horowitz's supporters had publicly branded them as terrorist collaborators. But this is pure political activism, nasty though it may be. Muslim students have every right to respond with their own flyers, demonstrations, and events. They also have a right to physical safety, and if anyone makes threats against them—or anyone else on campus—the university administration is obligated to respond.

But the sort of protection these students—and so many others—are demanding goes well beyond physical safety. They think the president of the university should lose his job because he didn't protect them from offense or harshly attack their critics. They want the campus to be a safe space, not for free and open inquiry, but for their own delicate feelings.

Horowitz is coming to SDSU to speak today. I'll post an update if anything interesting happens.