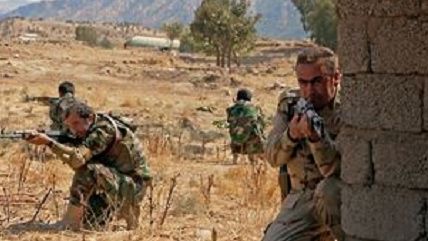 A Navy SEAL became the third U.S. casualty in Iraq since combat troops were returned to the country in 2014.

A defense department spokesperson said the unidentified SEAL was killed in a firefight "three to five kilometers behind the forward line of troops", near Mosul, after Islamic State (ISIS) fighters broke through the line, according to CNN.

Defense Secretary Ash Carter told reporters in Germany that the casualty illustrated "it's a serious fight that we have to wage in Iraq."

There are 3,000 U.S. troops conducting combat missions in Iraq, and they've been joined by 250 additional troops in Syria, bringing the official total in that country of U.S. troops to 300. The Obama administration has resisted the idea that there are "boots on the ground" in Iraq and Syria.

"They are wearing boots and they are on the ground," a State Department spokesperson explained in a daily press briefing last week. "But that doesn't mean that they are in large-scale ground combat operations." The spokesperson, John Kirby, insisted the press was "wrapped around the axle on the phrase 'boots on the ground.'"

"Yes, there's boots on the ground.  We've got pilots that have been flying airstrikes since August of 2014. Don't tell me and don't tell them or their families that they're not involved in actual combat over Iraq and Syria," Kirby continued. "But that's a big difference between that and saying we're going to involve ourselves in conventional ground troops and ground force operations on the ground, which we have not done and there are no plans to do it."

The Navy SEAL killed today was characterized by defense officials as an advisor to the Peshmerga, Kurdish forces. An anonymous official told the Washington Post ISIS broke through the front line using armored vehicles carrying explosives that were followed bv combat troops behind them.

A commander with the Nineveh Protections Unit, a mostly Christian local militia recognized by the government in Baghdad, described the attack to the Post.

"American special forces came to rescue us with four vehicles," Bahnam Aboush told the Post. "They opened the way for us to retreat then one of their vehicles was hit." Aboush blamed "limited capabilities" and "old rifles" on the inability of his forces to defend against the ISIS attack.

U.S. troops returned to Iraq in the campaign against ISIS in 2014. The last U.S. combat troops previously departed Iraq in 2011 after President Obama tried, but failed, to extend the presence of combat troops in the country. He took credit for ending the Iraq war in his 2012 re-election bid, but later insisted the 2011 pull-out was not his decision.

When it bothers to, the Obama administration argues the campaign against ISIS is covered by the 9/11-rleated authorization of the use of military force (AUMF) against Al Qaeda (of which ISIS is an offshoot-cum-competitor) and "associated forces." President Obama requested authorization of the use of military force specifically for ISIS but has not received it. A 2014 effort to repeal the 2002 AUMF on Iraq failed, with both it and the 2001 AUMF remaining in force and Congress doing little about it and the U.S. military campaigns in Afghanistan, Iraq, Syria, and elsewhere that those AUMFs have helped justify.