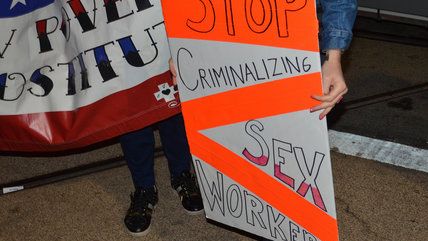 Good news on the prostitution-decriminalization front is pretty hard to come by these days, especially in states like California, Texas, and Washington where stopping "human trafficking" has turned into a full-blown war on consenting adults selling and paying for sex. But wonder of wonders, the California legislature is actually considering a measure that would reduce the criminal penalties for sex workers, including repealing the current mandatory minimum jail sentences for repeat prostitution offenders.

Under current California law, anyone convicted of a second prostitution offense must serve at least 45 days in jail, with subsequent convictions mandating at least 90 days jail time. Offenders may also have their driver's licenses suspended for up to six months.

The California Senate has already approved a measure to abolish these mandatory minimum penalties and the licence suspension provision, with Democrats largely in favor and Republicans largely opposed. The bill is now headed to the state Assembly.

But—of course there's a but, right?—the bill isn't all sunshine and lollipops from a feminist, libertarian, or sex-worker rights perspective. The reason its sponsor, Sen. Bill Monning (D-Carmel), gives for favoring reduced penalties isn't because he believes adults should have the right to enter into consensual sexual relationships without state interference. Rather, it's predicated on a belief that women lack sexual and moral agency.

Mandatory minimum jail sentences for prostitution is a "flawed policy," he said, because the women selling sex are "victims of human trafficking." He's not hoping for less arrests and prosecution of sex workers, he just wants those convicted to be sent to "diversion" programs. Right now, with the mandatory minimums, judges are forced to sentence repeat prostitution offenders to jail; now they can give them the option of attending bullshit propaganda programs and only send them to jail if they decline the "help."

The bulk of the prostitution diversion programs that I've read about (and I think that's most of them) are run by religious groups, offering a hefty dose of moral condemnation along with their alleged aid. Or they're focused on things like yoga and meditation and teaching women why they're better than selling sex. Unfortunately, these programs tend to provide women with little in the way of job training, job placement assistance, or any other practical components. They require an intensive time commitment (usually at least several hours a day, every day, for a few weeks), which makes sticking to the programs difficult for those who have children or are trying to work a "real" job. The rate of completion of these programs is low, and those who drop out risk being thrown in jail anyway.

But who cares if it actually helps, right? For politicians, it's attaching one's name to a bill that counts. Right now, California lawmakers have introduced so many human-trafficking bills that they've become redundant, with a slew of overlapping bills covering the same legal territory. There are currently some 25 to 30 bills related to human trafficking in the Assembly alone, according to Assemblywoman Toni Atkins (D-San Diego).

You might think legislators would simply be happy to have the issue addressed, and some sponsors of the overlapping measures would drop theirs and band together on one bill. But that, of course, would preclude each sponsor from getting the credit for Doing! Something! about a high-profile, good-PR issue.

"Invariably, there's not coordination," California Assemblywoman Lorena Gonzalez (D-San Diego) told the Voice of San Diego. "Everybody wants to do something."

Because none of these shameless grandstanding hypocrites dedicated lawmakers will actually withdraw their bills and risk losing the do-gooder credit, the bills are currently being held and sorted out by the Assembly's appropriations committee.