Those who call for aid shouldn't ignore where the territory's money actually went. 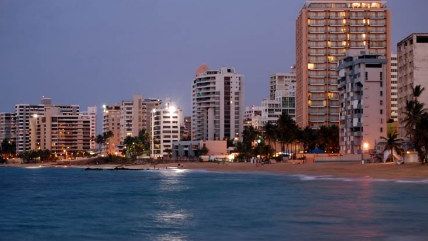 Nowhere in John Oliver's recent 20-minute segment on Puerto Rico's massive $70 billion debt (it officially defaulted on its payments yesterday) does he mention public employee pensions and benefits and the role they've played in the island territory's financial crisis.

He talks about the various business tax incentives that helped create the situation, and there's actually a lot to learn from his segment, so we shouldn't dismiss it entirely. But like a lot of political activism over municipal debt crises, Oliver zeroes on only certain components and downplays or outright ignores others in order to create a class of villains and victims that doesn't completely reflect reality. In this case, he sets his sights on the whipping boys who run hedge funds who want to make sure Puerto Rico prioritizes paying their municipal bond debts. The victims are the people of Puerto Rico who are seeing all their government services reduced (and taxes increased) as a result of the island struggling to scrounge up money to pay its bills.

What is misleading in Oliver's story is the assumption that what Puerto Rico's government had been spending its money wisely and appropriately for the benefit of the populace it serves prior to this crisis. And when you look deeper, what you see is very similar to what we see in ailing municipalities in the United States: Puerto Rico has been throwing its money at its employees now and not adequately preparing for what would come down the line. In fact, not only does Oliver not engage in this issue at all, he ends a quote by former reformist Gov. Luis Fortuño by accusing him of being part of the problem (while presenting no facts), though Fortuño fought hard to salvage Puerto Rico's financial situation. For a better perspective, watch Fortuño speaking at Reason Weekend back in 2012 here.

Reuters thoroughly researched the state of Puerto Rico's employee pensions and found them disastrous, in even worse shape than those in high-debt states like Illinois. In April, Reuters determined the government's unfunded portion of its pension liabilities to total $43.2 billion—out of $45 billion. Meaning, Puerto Rico's pension shortfall stands at 96 percent.

Why is the shortfall so high? Because whenever Puerto Rico had money, it did not sock it away to prepare for employees' retirements:

Since Puerto Rico gained self-rule in the late 1940s, improvident populist governments have lavished additional pension benefits on public employees, from holiday bonuses to loans for international travel. These measures have rarely been accompanied by moves to pay for them, and occasional efforts to fill the funding gap have fallen short.

Puerto Rico reformed its pension program in 2013, increasing retirement ages, contribution levels, and transferring employees to 401(k)-style programs. But these are solutions that help keep the debt from growing. It doesn't deal with existing debt. And what has happened is similar to what we've seen in New Jersey at the hands of Gov. Chris Christie. This reform requires that the government start making lump sum payments to reduce its pension debt. It was supposed to have paid $367 million by now. It has only paid $23 million. So the bomb kept ticking until it finally exploded.

The mess has put Puerto Rico in a situation where, like many bankrupt municipalities, it either has to screw over pensioners or screw over bondholders, or screw over both groups to a lesser degree. Oliver notes the complication that Puerto Rico is prohibited by federal law by filing for Chapter 9 bankruptcy. Veronique de Rugy warned against recklessly changing the rules here and what it would mean for the creditors who have purchased bonds to have the rules suddenly retroactively changed. Given that Oliver has cast hedge funds as the villains, one suspects he doesn't see the downside of this. George Will does, though, and recently warned that if Puerto Rico is allowed to find legislative ways to not have to deal with the consequences of its government's terrible behavior, we'll see badly managed states like Illinois attempting the same thing.