Is Target Stock Going "in Toilet" Due To Conservative Boycott Over Bathroom Policy?

Flush this claim in the nearest men's, women's, or family restroom - along with stories of pervs being drawn to Target like flies shit. 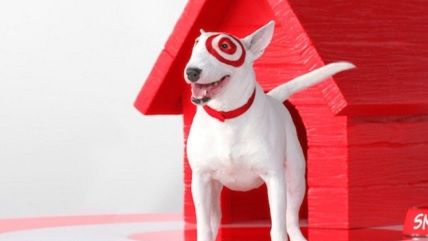 After the Minneapolis-based Target announced that it would allow customers and workers "to use bathrooms appropriate for the sex that matches their appearance, not necessarily their birth sex," social conservatives announced an online petition and boycott of the low-end-but-still-trendier-than-Walmart retailer.

The Target Boycott Pledge is spearheaded by the American Family Association, which claims that over 1 million folks have signed up to steer clear of Target stores until the company reverses its policy and…starts inspecting customer genitalia or something. "Target's policy is exactly how sexual predators get access to their victims," harrumphs the AFA (emphasis in original). "And with Target publicly boasting that men can enter women's bathrooms, where do you think predators are going to go?"

In the wake of the boycott, conservatives are crowing that they are righteously destroying Target's stock price since the company welcomed fat, sweaty, hairy men to just sort of hang out in store bathrooms all day. The basis for this is that Target's stock price dipped from $84.14 a share about a week-and-a-half ago to $79.27 last Friday.

"TARGET STOCK IN TOILET: Boycott Passes 1 Million As Corporate Losses Pass $2.5 BILLION!," reads a typical headline of the genre. "Corporate America," warns a writer at RedState, "Learn from Target's mistakes. Just because the self-righteous celebrities and self-indulgent rich people like Donald Trump that you hang around with make you feel socially pressured to cater to leftist ideas doesn't mean you should. They may seem loud, but the rest of America can be a lot louder when we want to be. About 2.5 billion times as loud."

Well, maybe. But then there's this: The stock closed yesterday at $80.12 a share, so maybe people really don't give a shit (har har!) about bathroom stuff. Indeed, here's a two-year trend line of the stock's price, just to give a larger context to what every dummy investor knows. Which is that prices go up and down a lot and only a fool mistakes short-term fluctuations for the true value of much of anything, but especially a stock in the retail industry.

More bad news for the potty warriors: According to the MarketWatch site, analysts are totally bullish on Target.

And why shouldn't they be? Contra the AFA's scaremongering, it turns out that the class of perverts who frequent discount retailers are not being drawn to the restrooms now that they are "free" to do so. No, they're sticking to the traditional scenes of voyeurism, such as the swimsuit aisle. To wit, this recent news report:

A Florida woman approached by a man holding a basket full of razors in the bikini section of a Target store caught him on camera, she said.

Candice Spivey recognized Jeffrey Polizzi, 31, last week at the Jacksonville-area Target as the same creep who asked her indecent questions at a grocery store two years ago, according to the Nassau County Sheriff's Office.

Polizzi, who was convicted of video voyeurism in 2009, could be seen on Spivey's cell phone video telling her, "You want to make sure it's not too sheer or clear."

Polizzi reacted in horror when she asked him if he remembered the earlier encounter. He dropped the basket, ran out of the store and sprinted out of the parking lot as Spivey yelled, "Get this guy! Stop him! Stop this guy! Call the cops!"

And yet despite this clear and oddly comforting example of a perv acting just like they always have, the usually razor-sharp Stephen Green of Vodkapundit, still finds a reason to loop this incident back to Target's laissez-faire bathroom policy, writing, "Under Target's new policy, this creep could have been hanging out in the ladies female-ish gendered room, no problem."

But—and this is a bigger but about which even Sir Mix-A-Lot himself could ever dare to dream—the creep wasn't in the bathoom.

Let's check back in on how that Target boycott is doing in a few weeks or month. And how the company's stock is faring, too.

Bonus link: Target is pushing Mother's Day gifts pretty big, so Heather, why don't you get all your shopping for both mommies done there?