Clinton's coronation continues to be delayed by an insurgent with different ideas on economics, the drug war, military interventionism. 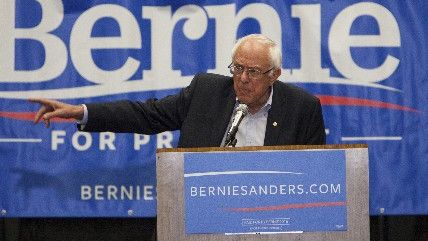 a registered Independent in Congress has essentially been a form of leftist protest of the Democratic Party, has declared his presidential candidacy will go all the way to the Democratic National Convention in July.

Politico reports Sanders told an audience at the National Press Club that Clinton "will need superdelegates to take her over the top at the convention in Philadelphia. In other words, it will be a contested convention." An NBC News/Wall Street Journal/Marist poll has the two candidates polling within the margin of error in Indiana, but because all Democratic primaries award delegates proportionally, Sanders needs to win over 60 percent of each primary the rest of the way to have any shot of matching Clinton's delegate totals.

He knows he's got little chance of overtaking former Secretary of State Hillary Clinton before the final primary in Washington DC on June 14, but Sanders continues to raise money ($26 million last month, according to CNN) for his insurgent campaign which even many hardcore Clinton supporters begrudgingly appreciate, to a point, for pushing Clinton "to the left" on economics.

Those same Clinton supporters, however, also think Sanders has had his moment and that it's time for the democratic socialist from Vermont to stop "attacking" his only rival for the nomination or drop out entirely. Some Clinton supporters claim the party needs "unity" now, lest the presumptive nominee suffers any more public criticism that doesn't come from the mouth of Donald Trump.

The Clinton camp continues to tout how much leg-work it did to support then-Sen. Barack Obama in 2008 once he was the nominee, but there seems to be a collective case of amnesia on how viciously Clinton's campaign fought Obama's down to the very last primary in 2008. In an article last week, Politico recalls Hillary Clinton saying as late as May of that knock-down, drag-out primary process that "Obama's support among working, hard-working Americans, white Americans, is weakening," and the article also notes that Bill Clinton reportedly used his presidential gravitas to try to convince superdelegates that "the country wasn't ready to elect an African-American President."

This isn't exactly the stuff that party unity is made of. The fact is, when it became clear that the delegate math was not in her favor, Clinton's once-formidible support among superdelegates dwindled, and she and her surrogates did everything they could to undermine Obama as an inexperienced outsider who would lose the general election.

Of course, not only did Obama handily defeat Sen. John McCain (R-Az.) in the general, he flipped some traditionally red states into the blue column, indicating the sustained attacks by the Clinton camp didn't seem to leave a scratch on him.

Clinton was supremely confident she would be the nominee in 2008 and the Obama juggernaut was something she never saw coming. This time around, with Clinton's only serious competition coming from an elderly, charisma-free senator with a long but undistinguished career in Congress, the burden of having to actually compete for her own party's nomination is clearly infuriating to the Clinton camp.

Though he changed his long-time affiliation from Independent to Democrat last November, Sanders' has demonstrated little concern with party unity. Indeed, his candidacy has promised "revolution."

Sanders has no interest in preserving Clinton's Democratic Leadership Council-style centrism, he wants to reshape the Democratic Party into one that's outwardly hostile to the free market and substantially increases the welfare state, but also abandons the drug war once and for all (including the legalization of marijuana) and turns its back on the relentless appetite for military intervention (or as Clinton would call it, "smart power").

If Sanders' end game is to influence Democratic Party policy, he has little incentive to drop out now, even if Paul Krugman thinks "he's in the process of blowing his own chance for a positive legacy." Bowing out now surely earns Sanders a plum time slot at the Democratic National Convention, but given how many votes he's already earned — to say nothing of the enthusiasm of his supporters — he could demand that regardless.

But Sanders' statement at the National Press Club this past weekend that he's "entitled to superdelegates" (specifically an amount of superdelegates that's proportional to the voting percentages he's won) indicates he wants to have it both ways. For all the influence his campaign may have affected on Clinton's, it's far too late to try to change the rules of a major party which he defiantly refused to identify himself with until he decided to run for president.

Superdelegates are a fact of Democratic Party life and specifically designed to keep insurgent candidacies at bay. For almost as long as Sanders has been a leftist thorn-in-the-side of the Democratic Party, Clinton has been a first lady, senator, secretary of state and power broker. She has cultivated the support of the party elites who are this year's superdelegates. If Sanders has designs on reforming that system, he'll have to save that intra-party revolution for another time.

In the meantime, Clinton supporters shouldn't fear competing in the marketplace of ideas. Donald Trump will still be Donald Trump when the primaries are over.