Scott Shackford | From the May 2016 issue 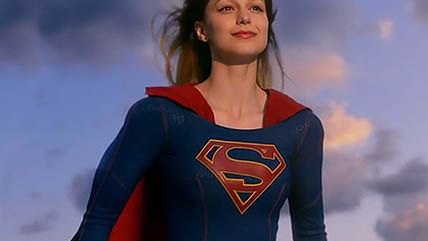 Supergirl (CBS), one of this TV season's many adaptations of comic book settings, feels like a feminist riff on Superman for millennials. Supergirl fights evil space aliens, including malicious Kryptonians, just like Superman. She works at a newspaper, just like Clark Kent (except her boss is a woman). Jimmy Olsen works alongside her.

She even has her own sinister businessman to fight, but he's not Lex Luthor. His name is Maxwell Lord. The television version of Lord is a Randian inventor who is deeply distrustful of government authority and believes people need to solve problems on their own. In Lord's case, this corrupts him into villainy when he forces changes onto a comatose girl to give her powers like Supergirl's, to prove humanity doesn't need an alien savior.

The show, interestingly, doesn't blame Lord's philosophy for his villainy and avoids confusing libertarianism with selfishness. Lord's personal arrogance is to blame.