South Sudan, described as an "American creation," has been at war almost since its independence in 2011. 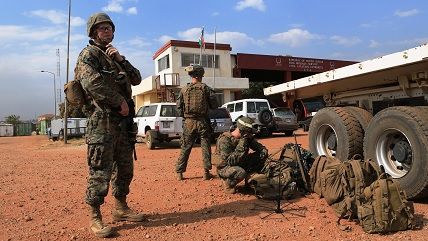 Riek Machar, the South Sudanese vice president who was dismissed in 2013 over coup charges and started his own rebel army, has returned to Juba, the country's capital, today, after a week of delays largely over how many rebel soldiers Machar could bring into the capital with him and what kind of weapons they could take with them.

A peace deal between Machar's forces and the government will apparently return Machar to his role as vice president, and offer his party a number of cabinet appointments to make as well as control of two oil-rich provinces, according to the Sudan Tribune.

Machar will also command his own army and police force for at least a year before it is integrated into the Sudanese People's Liberation Army, the southern Sudanese rebel group that became the official army of the country when its residents voted for independence in 2011.

A 2014 New York Times article called South Sudan "in many ways an American creation, the result of a "referendum largely orchestrated by the United States" with "fragile institutions nurtured with billions of dollars in American aid." This was at the height of the civil war in South Sudan, once a hopeful to be one of America's "success stories" on the African continent.

"None of us is naïve; this is a real and profound crisis," Gayle Smith of the White House National Security Council told The Times at the time. "But we've got a long history, and we've got some leverage." That leverage, however, was disappearing as South Sudan became the recipient of oil revenue after independence that used to go to the Sudanese government in Khartoum. Independence also meant it was no longer subject to the U.S. embargo on Sudan.

South Sudan has topped the Fragile States Index for the last two years, surpassing even Somalia. South Sudan's president, Salva Kiir, has been linked to a construction company awarded at least $160 million in government road contracts since South Sudan's independence.

The country spends a greater percentage of its gross domestic product on its military than any other country on the planet. The U.S. has spent at least $1 billion on aid to South Sudan's government, including for its military. Human Rights Watch estimates about 15,000 child soldiers have been conscripted during the civil war, by government and rebel forces.