Melissa Click Rewrites History, Thinks She Was Fired Because 'I'm a White Lady'

Assault is wrong, even if the person committing it has a minor in women's studies. 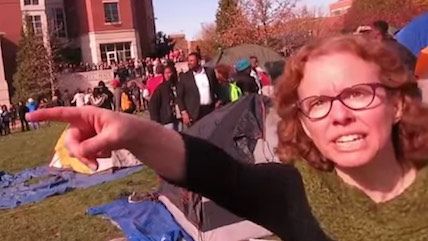 Melissa Click, the scowling face of campus repression and candidate for least self-aware person in academia, is attempting to rewrite history in her remarks to an all-too-sympathetic reporter for The Chronicle of Higher Education.

Click's confusion is such that she sees herself as a white savior of oppressed black students on campus while simultaneously believing that the university fired her because she was a white lady. She is also actively courting free-speech-martyr status, despite the fact that she repeatedly attempted to censor journalists and faculty members. Click isn't sorry; she's sorry she got caught.

Let's delve into some of this nonsense:

But while the video of her screaming at a student went viral, turning her into the Melissa Click, the confrontation on a quad during a protest here last year really wasn't that remarkable, in her mind. The assistant professor of communication at the University of Missouri was just doing what other professors and administrators were doing there, too, she says. So why did she lose her job?

She has one idea. Under pressure from state legislators, she says, Missouri's Board of Curators fired her to send a message that the university and the state wouldn't tolerate black people standing up to white people. "This is all about racial politics," she says. "I'm a white lady. I'm an easy target."

But if the university's actions were about sending a message to black people, why was a white person the only one disciplined? If it's true, as Click claims, that she was singled out because of her race, than she's really alleging that the university was too kind to people of color engaged in similar activism.

In reality, that's not remotely what happened. The reason Click was punished, and others were not, is because she was caught on video exercising violence against a student-journalist. She committed a crime and was sentenced to community service because of it.

It might be true that the university's decision to fire her was unwise, or should have been handled by the faculty instead of the curators. But Click was not singled out because of who she is. She was singled out because her conduct was maximally reprehensible, and she was caught in the act.

While Ms. Click acknowledges that she was certainly frustrated that day, she says she was simply trying to protect the black student protesters. Everything she has come to stand for since the video came out—intolerance, anger, mouthiness, and dismissiveness—is exactly the opposite of who she says she really is. Focusing on her behavior, she says, is a way to take attention away from the demands of Concerned Student 1950, the group of protesters.

"I'm not a superhero," Ms. Click says. "I wasn't in charge." But she's taken the fall. "When it got out of control," she says, "I was the one held accountable."

And not by accident. Click was held accountable because she committed assault. If her behavior is drawing attention away from the student activists, that's entirely her own fault.

While in Washington for a feminist punk-rock concert, she marched for women's rights, and became the first student, in 1993, to graduate with a minor in women's studies from James Madison.

While writing her dissertation, she moved to Missouri to follow her now-husband, Richard Callahan, an associate professor of religious studies at the public flagship. The transition from Amherst to the Midwest was difficult. But eventually, Ms. Click found a farmers' market, she says, became a visiting instructor at the university, and befriended other East Coast transplants.

She was passionate and sometimes annoyingly self-righteous, her former colleagues say.

Is this the profile of a woman who has overcome great adversity, or the profile of an intolerant ideologue firmly convinced of her own greatness? It sure sounds to me like Click would have much in common with the professor who wouldn't recommend a pro-gun student.

The last chunk of the article notes that Click is in rough shape now: People send her death threats and cast judgmental glances at her on the street. That's wrong. She shouldn't have to live in fear. She doesn't deserve harassment—no one does.

But she doesn't deserve sainthood, either. She did a very bad thing, and her revisionist attempts to explain away her criminal behavior should be rejected. Assault is wrong, even if the person committing it has a minor in women's studies.