Because it would have hurt an already anemic economy. Sound familiar? 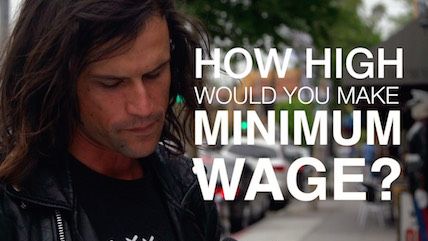 The #FightFor15 movement is continuing to make gains. After steamrolling through large urban centers such as Seattle, San Francisco, and New York, now it may be coming to entire states near you. New York and California recently adopted a $15 statewide minimum wage, and both Democratic presidential candidates have advocated extending the policy nationwide.

While Bernie Sanders has made political hay out of Hillary Clinton's seeming reluctance to fully embrace his rush to $15, she has been coming around to the same talking points of late. Of course, when the rubber meets the road, Hillary seems to have a different take on drastic wage hikes. When she was running the show, the State Department helped block Haiti's efforts to increase its minimum wage from 27 cents to 61 cents per hour. Why? According to U.S. Embassy cables obtained by WikiLeaks and analyzed by PolitiFact:

back in 2008 and 2009, embassy officials repeatedly told Washington that a hike would hurt the economy and undermine U.S. trade preference legislation known as HOPE.

The program, shorthand for the Haitian Hemispheric Opportunity through Partnership Encouragement Act of 2006, gives garments manufactured on the island duty free access to U.S. markets.

So Hillary thinks that drastic wage hikes—even those that leave the hourly rate under a dollar—can have detrimental economic consequences, or she's at least willing to let her subordinates make such claims when convenient. But due to political expediency, her view changes when it comes to U.S. businesses and workers.

Even if affluent urban centers in the U.S. may be able to absorb huge increases in labor costs without extreme pain, what happens to small businesses in places like, say, Detroit if their wages more than double from the current federal minimum of $7.25 per hour? And what happens to the low-wage workers who depend on the jobs they provide?

While it will take a few years for all the implications to shake out, there is already evidence of some nasty unintended consequences, even in wealthy urban centers. The first step of Seattle's wage increase, to just $11 per hour, has already led to the largest three-month job losses in the city's history and large increases in restaurant prices, and California's new minimum bodes ill for its apparel and hospitality industries, among many others.

Are these trade-offs worth it? In the video below, Reason TV took to the streets of L.A. to find out what residents think, and just how high they would like to see the wage go.