Leftists don't own the poor even though they've done their best to keep them in poverty. 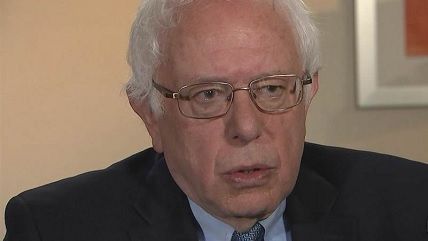 Appearing on NBC's Meet the Press, Sen. Bernie Sanders (I-Vt.), who is running for the Democratic nomination for president, blamed his losses in states with the highest levels of income inequality on the fact that "poor people don't vote."

There's one major problem with Sanders' theory of voting. Poor people who did vote have rejected him so far. According to the Washington Post, in state contests where network exit polling was conducted, Sanders lost to Clinton among voters making less than $50,000 by 11 percentage points. He lost "middle class" voters ($50,000—$100,000) by 9 points and those making above $100,000 by 21 points.

Sanders' argument is not a new one. Left-wing politicians often argue that poor people will vote for them and that when they don't, that that represents a vote "against their own interests." Rarely do such politicians talk about trying to educate voters. As Sanders posited, mere increased turnout would improve the prospects of left-wing candidates.

The view is astonishingly myopic, condescending, and dismissive of the poor. Perhaps poor people are not interested in policies like those Sanders espouses because most efforts to "reduce" income inequality destroy the prospects of upward income mobility for working Americans. The increased dependency on the state, the increased regulations, the increased taxes, all work against efforts by poor working Americans to improve their economic conditions.

Perhaps they are aware of this despite a generations-long effort by Democrats to propagandize the poor and lock them down as a voting base in places like Detroit and Baltimore, whose poor people have not enjoyed any relief due to decades of single-party rule. Were Republicans not so narrow-mindedly interested in culture wars and playing into the stereotype of them that Democrats have constructed, perhaps they'd do better among the poor.

Especially with the broad dislike for the Democratic and Republican frontrunners, the Libertarian party has a unique opportunity to demonstrate how their policies of limited government, and economic non-interference would create the best conditions for poor people to lift themselves out of poverty, without Sanders and government hangers-on like him profiting off a system of dependency and intervention that traps poor people in long-term poverty.