Need a Breather Before May Sweeps? Here, Have a Baby Elephant 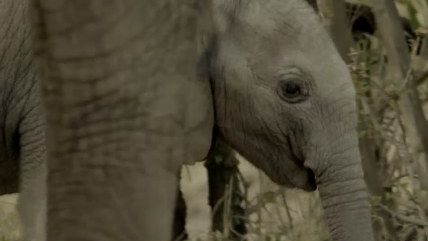 That poor hunter who killed Cecil the Lion last year and became, as Jimmy Kimmel declared, "the most hated man in America who never advertised Jello pudding," probably could have avoided trouble if he'd just shot an elephant instead. Consider the following revelations from Nat Geo Wild's documentary Little Giant: A Baby Elephant's Journey:

They are conspicuously gluttonous consumers, spending up to 16 hours a day eating. Their daily diet—400 pounds of food, 50 gallons of water—would feed an entire village of Sally Struthers' kids until their great-grandchildren die of Alzheimer's. They sneer at sustainable agriculture, ripping down entire trees to get at the grass beneath their canopies. They pander to gender stereotypes drawn out of 1950s dime novels; elephant chicks almost always go with the biggest guy, and then sluttily do it in front of crowds of cheering pachyderm delinquents and their depraved kids, some of whom are given debilitating hip-hop names like Little E at birth.

Less a true documentary than one of those anthropormorphized Disney nature films in which poor but happy families of prairie dogs persevere against drought and villainous hawks, Little Giant follows—sort of—an elephant family's trek across Kenya's Maasai Mara landscape.

I say "sort of" because the Pooles' cameras are easily diverted by any striking image, of which the Maasai Mara is stuffed to the brim: menacing lions, prancing wildebeests, gracefully ungainly giraffes, madly defecating hippopotamuses. The fact that many of these naturalistic icons are plotting to gore, squash or eat one another only slightly distracts from their grandeur.

The protagonist of all this is the aforementioned Little E, a rather dim newborn elephant whose most endearing trick—provided your nipples aren't involved, of course—is trying to nurse with the wrong mom. Elephants, it turns out, tend to favor the early child-rearing theories of Dr. Spock over Montessori methods, so the usual reaction is a boot in the infant butt.

At least some of Little E's seeming inadequacies turn out to be standard elephant ethnology, including his inability to slurp up water with his trunk and spray it into his mouth, seemingly a capability of even the most broken-down, inbred Barnum & Bailey pachyderms. Little Giant, however, informs us that it usually takes a baby elephant a year or so to master the manipulation of its own trunk, which has 15,000 different muscles. (A human hand, by comparison, has 34, so your baby's ability to grasp your finger at the age of one month is no guarantee that he's not a hopeless lunkhead. Keep worrying.)

Even so, there's not much to suggest that Little E will grow up to be an elephant rocket scientist. So we need to fervently hope for him to put on a few thousand pounds; otherwise he doesn't stand a chance with those notoriously choosy elephant girls, who don't go for guys with small paws. Male elephants have no shot at all until they're 20 years old, according to Little Giant, and even then face long odds. "Some bulls will even die virgins," warns the narrator. Uh-oh. Has anybody heard from Dumbo or Babar?