The best liberty-themed ink on the internet 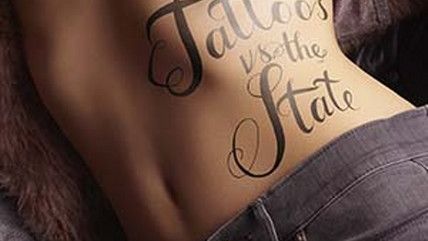 Our new issue is out, featuring a great essay, "Tattoos vs. the State," by our very own Damon Root, who writes:

"Over the past half century, tattoo artists have been subjected to all manner of overreaching, ill-fitting, and just plain nonsensical government controls. They've been hassled by clueless health departments, shut down by moralizing zoning boards, and outlawed entirely by busybody city councils and state legislatures. But tattoo artists can be a prickly bunch, and increasingly they're opting to fight back."

That link above won't work for everyone, by the way, but if you were a digital subscriber, you could read the whole thing right now!

In celebration, we're announcing the winners of our first (and likely last) libertarian tattoo contest. Thanks to everyone who entered and voted.

First up, the Readers' Choice winner, a piece that Gabe Graves desribes simply as "Muh Gadsden tattoo." (The thoughtful nipple censorship was Gabe's choice, not ours. We're pro-nipple here at Reason.)

The Editors' Choice winner is Aaron Moyer who tells is that his submission is "Liberty, as written on the Declaration of Independence. I got this in July of 2009, 2 days before July 4th, and watched the fireworks on park grass in Philadelphia—surrounded by some amazing friends—as the scabs healed. One of the best decisions I've ever made, and one of the most cherished moments of my life. #triggerwarningfortoomuchfreedom #libertyishalfmyupperbody #livefreeordie"

Honorable mentions go to the insouciant entry from Caleb Watney, who says: "I drew on myself in Sharpie. It's not a tattoo, but if we always played by the rules we wouldn't be libertarians now would we…"

…and to ErikaGrace Davies, who submitted a "stick-and-poke [that] says "liberty" in Morse code. It was done by my neighbor when I lived in the Hill District of Pittsburgh. What's more libertarian than that?"

Thanks again for sharing your ink. Winners should drop me a line to claim your swag.

The full slate of entries can be viewed here.