The Dark Side of Socialized Motherhood

Austria gives women generous maternity benefits while shuffling them into the pink ghetto. 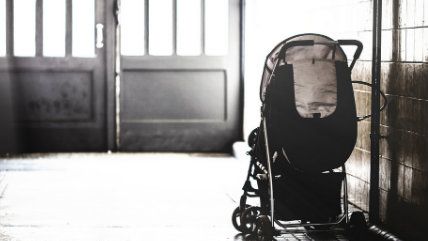 In Austria, "virtually every mother … stays home for at least one year, if not two or three," following the birth of a child, thanks to generous maternity leave provide by the state. They also enjoy job-protection while they're on leave, government-subsidized prenatal care, and, after the child is born, subsidized daycare and free schooling. When American writer Abigail Rasminsky got pregnant soon after her husband accepted a job in Austria, she was psyched about how easy she would have it compared to pregnant friends back in New York.

But a funny things happens when the state starts encouraging not just parenthood but a particularly gendered version of it—as Raminsky would soon find out. The dark side of socialized motherhood is the continued codification of "mother" as a woman's most important cultural role.

"I didn't foresee motherhood derailing my career or my ambition," writes Rasminsky in New York magazine. But her husband was earning an OK salary, and the family could supplement this with the €12,000 she received in maternity-leave benefits from the Austrian government. There was no immediate need for Rasminsky to get back to work, and she felt disconnected from the writing projects she had been working on pre-Austria and pre-baby. Before long, Rasminsky writes, "I reluctantly turned into the Primary Caregiver" and little else.

At first, Rasminsky feels "resentful" and "trapped." But then she notices that her "can I have it all?" concerns aren't at all echoed by Austrian friends.

Virtually every mother in Austria stays home for at least one year, if not two or three — very few day cares accept children before 12 months and nannies are not the norm. All kids are guaranteed a subsidized spot at age three, but many kids start at 18 months or 2 years when maternity leave ends.

Though she calls it "virtually impossible to criticize" such a system, Rasminsky—critical or not—does see its dark side: early parenthood in Austria is "particularly gendered." New moms are in fact required to take take 16 weeks maternity leave. Dads are allowed (not required to take) their own two months paternity leave, but few took it. Why would they when mom had so many months at home available? Even for fathers who wanted to spend time with a new child, the temporary pay cut it would bring (neither paternal nor maternal leave is subsidized at a person's full pay) was a deterrent, as they were largely the primary breadwinners.

"But unlike my husband and me, my expat friends didn't struggle over the gendered turn their marriages had taken," writes Rasminsky. "The logic seemed to be: My husband had his job, and I had mine, which was culturally mandated and for which I was paid. What else could I possibly want?"

The fact that Austrian mothers could stay home with young children without financial worry became, in all sorts of ways, a mandate that they do so. Daycares were only open for limited hours. Nannies and other early-childhood care options were scarce. As a friend of Rasminsky's put it, "It's a country that protects mothers, not women."

The result, for Rasminsky, has beeen "fewer opportunities," less money, and not being "as far along professionally as many of my working-mom friends back home." One might think this would make Rasminsky re-think her affinity for socialized motherhood. But after initially finding it "problematic," she eventually learns to stop worrying and love her new culturally prescribed role.

"I now see that putting my daughter in full-time care at four months would have been wrong for me," writes Rasminsky. "It is, in fact, still wrong for me, and she's now almost 3." While Rasminsky imagines her New York City counterparts "racing home at 6 p.m., hoping to catch an hour or two" with their kids before bed, she gets to spend "long afternoons at the park" with her daughter whenever she wants. "For that, I only have Austria to thank," she writes.

It's cool that Rasminsky has found stay-at-home motherhood to be more fulfilling than she expected. Ditto that she doesn't mind the tradeoffs in terms of reduced money and opportunities. Mandatory mommy-and-me time worked out well for Rasminsky, who was admittedly stalling in her career when she got pregnant, whose profession (writing) can be done much more flexibly than many others (allowing Rasminsky to effectively opt-in and opt-out at the same time), and who is apparently inclined to spend all day with a toddler and not go insane.

But what about the undoubtedly countless women who start out feeling as Rasminsky does and don't have (or can't rationalize themselves into) a change of heart like she did? What about the women who won't ever have children, by choice or circumstance, yet wind up penalized by employer expectations regarding young women and motherhood? Myriad studies have shown that places with the most generous maternal-leave policies and other parenting-specific subsidies wind up with major tradeoffs in terms of women's workforce advancement: higher employment overall but less women in management or leadership roles. More women who eventually return to work after a pregnancy, bigger gaps in men and women's pay.

I wish women like Rasminsky could see that just because something was palatable for her, it might not be for many other women. That these policies are likely to harm women's workforce prospects and equality in the long run. Instead, she notes that Austria is a country that values mothers but not women per se, and because Rasminsky herself is a mother, she says thanks.