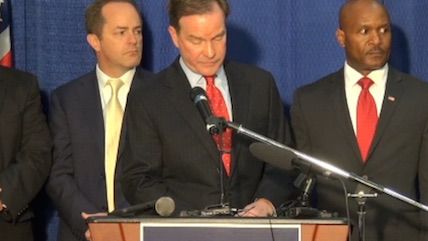 Mike Prysby and Stephen Busch, who work for the Michigan Department of Environmental Quality, are accused of tampering with lead levels, conspiracy to tamper with evidence, and joint agreement to conceal test results from water samples.

"They failed to discharge their duties," said Schuette in a statement.

The attorney general has also brought charges against Mike Glasgow, a water supervisor in the city of Flint, for tampering with evidence and willful neglect of duty.

The charges against Glasgow are controversial because he was actually an opponent of the Flint River plan from the beginning. He even sent an email to other officials—Prysby included—claiming that the water treatment facility was not ready for operation, according to The Detroit News.

Charges against the DEQ officials might make more sense. As Reason's Shikha Dalmia has noted, this agency ignored legitimate citizen concerns about the water.

Of course, the Environmental Protection Agency deserves plenty of blame, too: the EPA allowed the DEQ to run faulty water tests and failed to warn citizens of the clear dangers.

Perhaps it's appropriate to file criminal charges against relatively low-level decision-makers, though this should not come at the expense of efforts to hold more senior officials accountable. Schuette, to his credit, has refused to rule out charges against Gov. Rick Snyder, also a Republican. In recent weeks, Snyder has expressed genuine contrition (unlike the EPA)—it remains to be seen whether his negligence merits criminal charges.

It's not actually crystal clear that criminal charges are the right way to discipline any of the officials involved in the crisis. Criminal charges, of course, require the finding of a "guilty mind" in order to stick. While it's not difficult to prove that these various bureaucrats horribly failed in their duties, it might be harder to prove that they did so in an intentional and fully-aware manner.

A better course of action—one that would not merely punish negligent bureaucrats, but also result in financial compensation for their victims—would be civil suits. Unfortunately, the government is (mostly) off the hook: it's very difficult to sue for damages because the government is almost entirely shielded from liability thanks to the doctrine of sovereign immunity.

That's just one of many reasons why Flint residents would be in better shape if their water utilities had been privatized to begin with: it's much easier to sue private corporations than it is to hold government officials accountable.