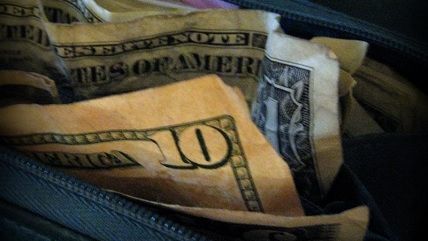 Donald Trump's plan to not only build a y-u-u-u-ge wall along the border with Mexico, but make our neighbor to the South pick up the tab for construction (at padded government rates, no doubt) is supposed to be an example of his think-outside-the-box policy genius.

And a special genius it is. Trump may have stumbled on an effective scheme for reviving flagging Mexican interest in seeking economic opportunity in the United States. And he seems to have hit on a brilliant stimulus for building underground financial markets.

Trump is already spurring international language skills, having inspired former Mexican President Vicente Fox to fluent English profanity. "I'm not going to pay for that fucking, wall," said the former head of state, who is the grandson of an American who crossed the border to find opportunity in Mexico.

Typically, Trump doesn't plan to leave the choice in Mexican hands. In a memo to the Washington Post, he laid out his proposal that "no alien may wire money outside of the United States unless the alien first provides a document establishing his lawful presence in the United States." That is, he wants to impose targeted capital controls on the flow of cash from the U.S. to Mexico.

"We have the moral high ground here, and all the leverage," adds Trump. "It is time we use it in order to Make America Great Again."

The "moral high ground" claim is questionable, considering that would-be President Trump asserts state dominion over people's money, telling them where and to whom they send cash they earned and own. And there's actually less leverage to be had than in the past. Just as the years since the great recession have seen a net outflow of Mexicans from the United States—Trump's wall looks destined to inconvenience more people trying to leave than enter—so remittances south of the border have also plummeted, by 29 percent between 2006 and 2013.

But we're still talking about an estimated $24 billion. That's a lot of leverage with which to convince Mexico to keep home people who are no longer so eager to come here anyway. That sort of persuasion might be effective when we consider that every dollar remitted back home may generate as much as $1.70 in economic activity, according to researchers. But that leverage will be effective in a perverse way. Tell Mexicans working in the U.S. that they can't send the money they've earned back home where it's used to pay bills, start businesses, and fuel the prosperity that has kept Mexicans home in recent years and there's a fair chance that more of the people currently in Mexico will have to seek opportunity elsewhere.

Or maybe they won't. Capital controls aren't new, and people around the world have grown proficient at making sure their money gets from Point A to Point B, no matter what the Donald Trumps of the world say.

One possible workaround is that migrants could smuggle—or pay somebody else (think criminal networks) to smuggle—physical cash back to Mexico. That's a bit risky and crude, though, to the point that elegant alternatives have existed for centuries.

"Migrant workers can also send money home via transfer systems, like the hawala system in the Middle East and India, that use a series of brokers to transfer money without having to physically send it abroad," notes Vox.com's Dara Lind.

But technology has cleared the way for even easier transmission of money, Lind adds. "In Africa, for example, where transaction fees on remittances tend to be highest (13 percent of remittances get eaten up in fees), people have started sending money directly by cellphone for much lower fees than banks charge."

Or people could game Trump's restrictions by bypassing the strict letter of the rules.

"The most obvious way around the new provision would be for those who can prove legal residency to send the money for those who cannot," writes Mary Anastasia O'Grady for the Wall Street Journal. "But wire transfers are only one way of moving money. It could also be deposited in a U.S. bank and withdrawn from automatic teller machines in Mexico by intended recipients."

And even higher-tech workarounds are available to people committed to controlling and using their money as they please. In 2013, the Adam Smith Institute's Tim Worstall marveled at Forbes that "Bitcoin was a great way to beat such attempts to limit your freedom to move your money where you want it to be."

Sure enough, it wasn't long before a growing number of people in places including Argentina and China were using the relatively anonymous and difficult to track digital currency to evade capital controls and bogus official exchange rates.

"Argentines are conducting an ambitious experiment, one that threatens ultimately to spread to the United States and disrupt some of the most basic services its banks have to offer," The New York Times cautioned.

Maybe the fastest growth in the United States will take place among Spanish-speakers.

None of this is to say that Trump's scheme to force Mexico to pay for his planned wall will have no impact—just that it appears bound to fail.

Trump's scheme can't force Mexico to pay the bill for his latest monument to his own ego. It can, however, make Mexico a bit poorer and increase the flow of illegal immigrants to the United States where they will have to use creative and probably illegal means to send their earnings home.

That's probably not what the nativist would-be president has in mind. But it does indicate a certain… let's call it "genius."