Almost one in five say they're thinking about alternatives to the big two. 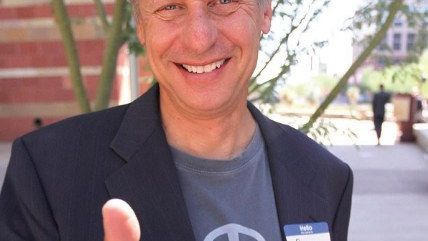 So we have a crop of unlikeable presidential frontrunners this year, not just to libertarians, but to many people. A new poll shows that a majority of the country's voters cannot fathom voting for Donald Trump, Ted Cruz, or Hillary Clinton in the general election. This is hardly unexpected news at this point.

That we have such an unlovable crop of monsters this season has prompted some media analysis and polling on the whole idea of tossing aside the two major political parties. NBC News released a recent presidential tracking poll that shows between 16 and 19 percent of voters considering voting third party this election, depending on who the candidate is, and another 8 to 10 percent may just stay home rather than pulling a lever for Clinton, Trump, or Cruz:

It's still very early in the election cycle, so perhaps don't jump the gun. Pollsters note that some of the unpopularity of the candidates is heavily influenced by intraparty fighting. There's plenty of time for Kumbayas and wound-tending to try to heal parties after the nominations. It will be interesting to see how this number tracks over the summer as we approach November. Gary Johnson was polling around 5 percent as the Libertarian Party candidate in the run up to the 2012 election. He ended with just under one percent of the vote, the highest tally for any third-party candidate in the race.

While the current third party polling numbers may look promising compared to 2012, a Rasmussen poll is a reminder of the massive uphill climb third-party candidates face. A majority of American voters—56 percent—believe it's unlikely a third-party candidate will win the presidency in the next 10 years. Only 36 percent think it's likely, and 12 percent think it's very likely.

Even further, this is a decline from numbers Rasmussen gathered from a poll in 2011. Back then 53 percent said they think it was likely that a third-party candidate will win the presidency in the next 10 years.

So between the two polls we see a significant number of people who say they're considering voting third party, but also an increase in the number of folks who don't think a third party candidate can win. It's generally risky to try to tie different polls and from different firms asking different people questions (and that's not even getting into methodologies). The discrepancy could reflect deep cynicism over whether individual voters feel as though their preferences matter. But it could be any number of reasons. We may have to wait until the GOP crowns its nominee before we get a real sense of how people perceive third party candidate viability.