We may not know for a while how many of the Empire State's 95 delegates will be awarded to Trump. 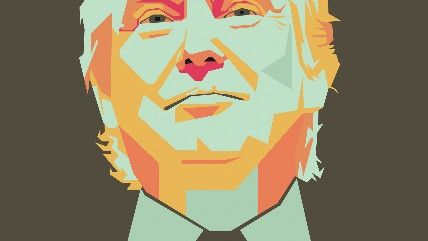 has won the Republican Presidential Primary in his home state of New York, according to MSNBC and CNN, though it's too soon to say how many delegates he will be awarded.

Each of New York's 27 congressional districts—regardless if any actual Republicans live in them—will award three delegates; any candidate winning 50+ percent in that district sweeps all three, but 49.9 percent gets you just two. The same formula is applied to the statewide total, and divvied up between 14 delegates. In plainer English, if Trump wins 50.1 percent in all 27 districts, he gets all 95 of New York's delegates; if he wins 49.9 percent, he gets just 61. That 34-delegate swing alone is larger than the number Trump won with his runaway romp in the state of Tennessee.

Entering today, Trump held 743 delegates, putting him ahead of his remaining rivals Sen. Ted Cruz (Texas), who has 517, and Gov. John Kasich (Ohio) who has 143. 1,237 delegates is the magic number to clinch the GOP nomination.

For much of the past four weeks, Trump polled at just over 50 percent in New York, while Ohio Gov. John Kasich hovered at around 22 percent. Texas Sen. Ted Cruz, Trump's closest rival in total delegates but hamstrung by his infamous "New York values" comment at a debate in January, has had trouble breaking 18 percent in the Empire State.

It should be noted that Trump had one of his most "winning" moments on any debate stage when he invoked the stoic solidarity of New Yorkers after 9/11 in response to Cruz's "New York values" dig. However, last night at a rally in Buffalo, Trump suffered a brain-fart, blowing a good amount of his 9/11 street credibility when he referred to that fateful day as "7/11."

Trump currently enjoys a lead of twenty percent over Cruz in next week's winner-take-all Pennsylvania primary, where 71 delegates will be at stake. Connecticut, Delaware, Maryland and Rhode Island will also hold Republican primaries next Tuesday, with 101 combined delegates at stake.

No upcoming contest looms larger than California, which will hold its primary on June 7 with 172 delegates to be awarded proportionally. Trump presently holds an eighteen percent lead over Cruz in the Golden State.