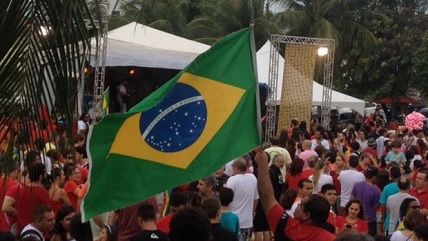 This weekend, the lower house of Brazil's legislature voted to impeach President Dilma Rousseff, comfortably clearing the two-thirds super-majority needed to move the impeachment forward. Next, the Senate must approve the impeachment—if that happens Rousseff must step down from office for 180 days while an impeachment trial takes place.

Rousseff has found herself embroiled in a massive corruption scandal involving Petrobras, the state-run oil company where Rousseff served as chair of the board of directors from 2003 to 2010, and the Workers Party (PT), which has ruled Brazil since the election of Luis Ignacio "Lula" da Silva in 2002.

In 2012 Krugman praised the "New Economic Policy" in Latin America, which amounts to increasing government spending to reduce income inequality. He noted Brazil specifically while complaining about how Argentina was getting less credit for its "recovery" (fueled by renationalizing industries and relying on populist rhetoric) than Ireland, which did not ramp up government spending while taking over industries and feeding its people populist rhetoric.

"I think Brazil is going pretty well, and has had good leadership," Krugman wrote, saying Brazil was identified as an "impressive" economy when Argentina, with similar GDP growth, was not because of "the state of economics reporting."

Lula, Rousseff's predecessor, has also been targeted by prosecutors over the corruption scandal, and Rousseff appointed him chief-of-staff to shield him from prosecution. Rousseff, and Lula before her, were darlings of the international left because they appeared to provide evidence that massive government spending could produce "positive" results like lowering income inequality.

As the current scandal was unfolding, last year the Supreme Court of Brazil ruled corporate donations to campaigns, like those of the state-owned oil company Petrobras, were unconstitutional. But the money "corrupting" Brazilian politics is government money. The scandal in Brazil illustrates that corporations don't play the leading role in corruption in government—government does.  The Guardian complains of a "corruption-tainted Congress" voting to impeach Rousseff, as if any government corruption excuses all government corruption.

The power government has, to redistribute wealth, to take over industries, to choose winners and losers, to hand out lucrative contracts, that power corrupts government officials, not money spent on their elections. Limiting the ability of people to donate to campaigns limits their ability to exercise political speech but does nothing to curb corruption in government—only limiting the powers of government itself can do that, as many Brazilians are now learning.