"The people in this building have a right to a safe environment ... where their jobs won't be interrupted," OSU officials say. 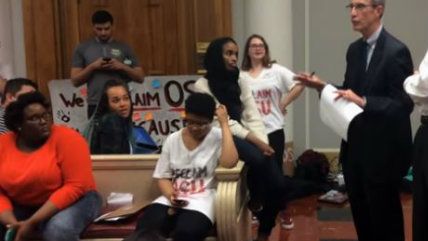 Should the Ohio State University (OSU) administration have threatened to sic the cops on student protesters staging a peaceful sit-in at a campus building? I'm with Conor Friedersdorf, who writes that he's "usually skeptical of any decision to call the police on peaceful protesters," or to expel students for campus activism. Still, in an era when college administrators routinely trip all over themselves to pander to student protesters, there's something almost comforting about this more authoritarian response to the campus left, especially since it was tempered with seeming respect and restraint from officials.

Here's precisely what a campus spokesman told the OSU students who had occupied a campus building last week:

If you are students, and I think the vast majority of you are, I want you to understand that you are violating the student code of conduct. As dictated to me by [university president] Dr. Drake 15 minutes ago to me on the phone, we have chosen to try to work with you this evening because we respect you. This is your university. And we want to have dialogue. We want the dialogue to extend beyond tonight. But if you refuse to leave, then you will be charged with a student code of conduct violation. And I'm telling you this now because I want you to have good thought and careful consideration. If you're here at 5 a.m. we will clear the building and you will be arrested. And we will give you the opportunity to go to jail for your beliefs. Our police officers will physically pick you up, take you to a paddywagon, and take you to be jail.

As Friedersdorf notes, "lots of college administrators decide to clear protests with force—recall the pepper-spraying cop at UC Davis, for example—but taking a preemptive, hardline position, bluntly and transparently, is a striking departure from other occupations I've seen."

But the most interesting part of this incident is the language OSU officials used to justify their action: the langague of safe spaces. Students couldn't just occupy any old campus building, the school said, because there were workers in those buildings, too, and the kids were freaking them out.

"The consensus of university leaders is that the people who work in this building should be protected also," said one of the school spokesman. "They come to work around 7 o'clock. Do you remember when you all made the rush down there and chanted to the folks outside the doors a minute ago? That scared people." A second OSU official told students that "the employees who work past five o'clock left early this evening. Do you know why? Because they were scared you were going to do something."

"The people in this building have a right to a safe environment," the first spokesman continued, "and to an environment where their jobs won't be interrupted."

Says Friedersdorf, who has been covering campus activism and its discontents for a while, "appealing to the safety and fear of staff in this way is something else I've never seen. But I suspect that it will be used against student protesters in the future. In my work defending free speech, I've repeatedly noted how speech codes implemented in the late 1980s and early 90s with the intention of protecting black students were ultimately used to charge and punish more black students than white students."

If we're allowing for a little optimism, perhaps this is just one lesson that each new generation has to learn for itself: The Man is never your friend. If you give authorities—be they campus administrators, cops, or federal officials—the tools to censor and the framework to sell it, they will never stop with using this power only in ways that you like. As campus administrators turn this "speech is literally violence" mindset back on their charges, let's hope that millennials and Gen Z get the message.