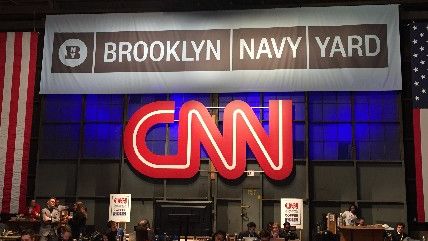 at the Brooklyn Navy Yard featured former Secretary of State Hillary Clinton (NY) and Sen. Bernie Sanders (I-Vt.) engaged in some particularly contentious sparring over a number of issues, including Sanders' recent attack on Clinton over her use of the term "superpredators" when supporting the 1994 crime bill.

The Clinton campaign has made no secret of its displeasure with what they perceive as Sanders' increasingly negative "tone," and even threatened to pull out of tonight's debate over it.

Wasserman Schultz said that "the sharpness of tone" was to be expected as the primary process nears its conclusion, but that "we shouldn't focus on the edginess, we should focus on the substance of the debate, which I'm quite proud of."

Cuomo brushed off Sanders' attack on Clinton. "This is New York," he said, "I thought it was a strong debate with strong language, but I don't think anyone stepped over a line."

Jeffries, however, was quite willing to say he thought some of Sanders' criticism of Clinton was "unfair."

"I don't think anyone who is familiar with Hillary Clinton's career can accuse her of being racist," Jeffries said, adding, "It's a ridiculous assertion to even suggest that Secretary Clinton would use a term that would be racially offensive to anyone."

Prior to the debate, Rep. David Bowen, Vice Chair of the Wisconsin Democratic Party and one of the few superdelegates who has pledged his support for Sanders, told me he thinks "both campaigns have been pushed and pressured to attack each other."

I asked Bowen if an issue like foreign policy, one of the few areas where a profound schism exists between the two candidates, is worthy of contentious debate. After all, Clinton has repeatedly implied that Sanders can't hold a candle to her foreign policy experience.

"Bernie has experience on foreign policy," Bowen replied. "His actions speak louder than words, like opposing the Iraq War. You could consider Bernie the 'peace president.' He believes in not using force unless it's very, very necessary."

Tad Devine, a former adviser to Al Gore and John Kerry's presidential campaigns and now a senior adviser to the Sanders campaign, offered platitudes, saying it's important for the Sanders camp to remain "hopeful, positive, foward-looking" and not attack Clinton harshly.

Both candidates continued their standing practice of avoiding the spin room, and though their respective surrogates and ostensibly neutral party leaders did their best to accentuate the positive vibes, tonight's punchy debate demonstrated the ever-widening gulf between the two camps.