Asks if Sanders is "'feeling the Bern' of reality yet". 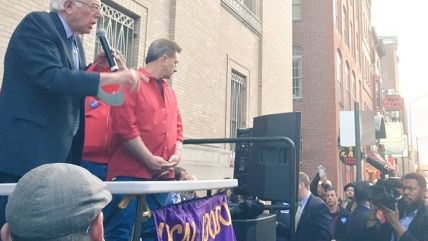 The CEO of Verizon, Lowell McAdam, responded to Bernie Sanders' assertions in the ongoing Verizon labor dispute, calling them "plain wrong" and "disconnected from reality" in a post on LinkedIn.

McAdam wrote that he read GE CEO Jeff Immelt's response to Sanders' attacks on his company with great interest and that he understood that "big companies are an easy target for candidates looking for convenient villains for the economic distress felt by many of our citizens."

Sanders has claimed that Verizon, among other named American companies, doesn't pay its "fair share" of taxes or sometimes even at all. McAdam pointed to financial statements that show Verizon paying $15.6 billion in taxes over the last two years.

McAdam also took issue with Sanders' claims about the ongoing negotiations between Verizon and the Communications Workers of America. "Contrary to Sen. Sanders's contention, our proposals do not call for mass layoffs or shipping jobs overseas," McAdam wrote. "Rather, we've asked for more flexibility in routing calls and consolidating some of our call centers, some of which employ a handful of people."

McAdam also pointed to reforms the company was looking to make to employee benefits packages, whose costs have run up to $1.4 billion a year. McAdam noted that Verizon's health plan was so "robust" it was subject to the "Cadillac tax" in Obamacare, legislation Sanders supported.

Perhaps most importantly, McAdam pushed back against the idea that prosperity is achieved by resisting changes in the marketplace. Landlines, and jobs associated with landlines, aren't coming back, and that's not a bad thing.

"Competition and technology change have eaten into our traditional phone business, with more and more Americans giving up their landline phones altogether," McAdam wrote. "To remain competitive, we've transformed our wireline operations into a broadband company by building fiber-optic networks, offering Internet and video services, and investing in employees' skills and work tools to help them make the turn to a 21st-century digital economy."

McAdam argues that Verizon's demands in union negotiations reflect their attempt to safeguard "good jobs, good wages and great benefits for thousands of workers" in the face of technological changes.

"Nostalgia for the rotary phone won't save American jobs, any more than ignoring the global forces reshaping the auto industry saved the Detroit auto makers," McAdam wrote, responding to Sanders' calls for a "moral economy" for America, and insisting he didn't want to see Verizon find itself in "the same boat" Detroit auto makers did.

The Communications Workers of America, which has placed 40,000 Verizon workers on strike, endorsed Bernie Sanders for president. Sanders claims in his case about "money in politics" that he doesn't have outside interests with Super PACs supporting him, yet had more Super PAC money spent in his favor than any other Democratic candidate, according to The New York Times. This is largely thanks to the super PACs of labor unions, like CWA.

Sanders' misrepresentation of Verizon, and a slew of other companies and even entire industries, illustrates an important reason to reject limits on spending on political speech. As an elected official, Sanders is free to say whatever he wants about Verizon. Yet his efforts to repeal Citizens United and impose new controls on political speech would limit the ability of companies like Verizon to engage in speech and respond to misleading and untruthful demagoguery. Sanders, and other liberal opponents of Citizens United, do not appear interested in a post-Citizens United regime where the political speech of labor unions is similarly targeted.

Ideally, a company's corporate leadership and the labor unions that arise from its workforce are both self-interested in the continued health, utility and profitability of the company itself. Looking to government to put a thumb on the scales is a sure way to wreck that mutually-beneficial arrangement, whether its cronyists or union bosses looking to get government in their business. It also explains why even Franklin Roosevelt was concerned about the power of public unions. Governments and their employees have little self-interest in the health, utility, or profitability of government agencies, when they can just pass laws to extract more money from taxpayers, be they "American workers" or the companies trying to keep them employed.